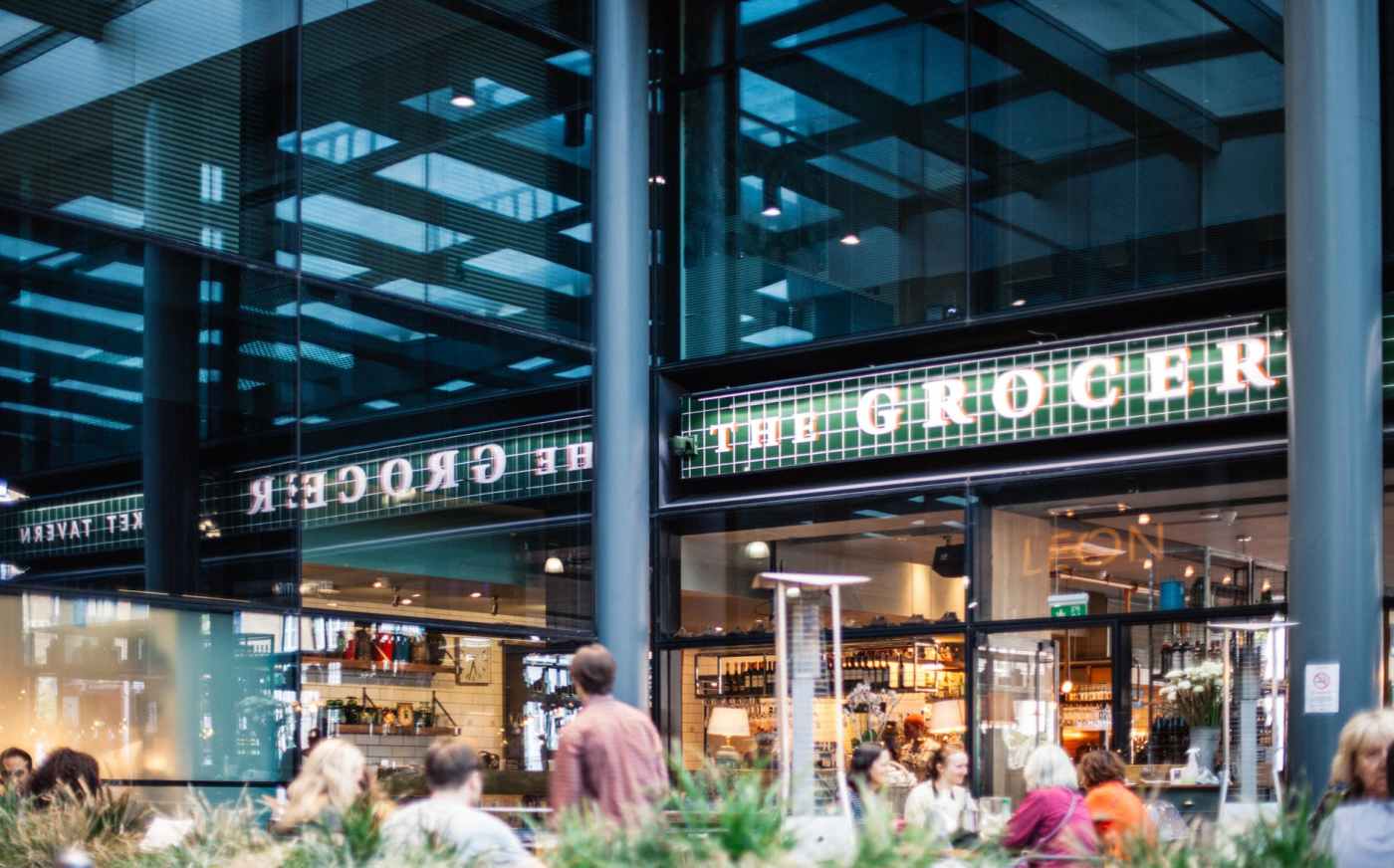 Consumers focused their spending on nondurable goods and services during July. Here are the five things we learned from U.S. economic data released during the week ending August 31.

Consumers continued spending in July while inflation hits the Fed’s target. Real personal consumption expenditures (PCE) increased at a seasonally adjusted 0.2 percent rate during the month. This was down from the 0.3 percent gains reported by the Bureau of Economic Analysis for the three prior months. Spending on goods and services each grew by 0.2 percent during July, with the latter split by a 0.6 percent bump in nondurable goods spending and a 0.5 percent drop in durable goods spending. Nominal (non-price adjusted) PCE grew 0.4 percent for a second consecutive month. Nominal personal and disposable income gained 0.3 percent, with real disposable income rising 0.2 percent. The savings rate slipped by 1/10th of a percentage point to +6.7 percent. Over the past year, real disposable income has increased 2.9 percent while real PCE has expanded 2.8 percent. The same report includes data on inflation—the PCE deflator growing 0.1 percent during July with the core PCE deflator (removing energy and food) gained 0.2 percent. Over the past year, the two price measures have grown by 2.3 percent and 2.0 percent, respectively, with the latter matching the Federal Reserve’s two-percent inflation target. 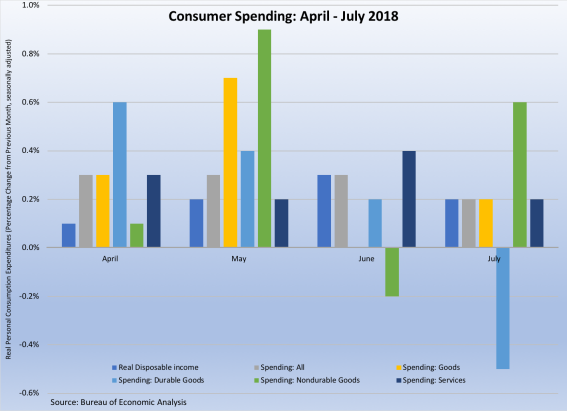 GDP expanded a smidge faster than previously believed during Q2. The Bureau of Economic Analysis’ second estimate of gross domestic product (GDP) for the months of April, May, and June has the U.S. economy expanding 4.2 percent on a seasonally adjusted annualized basis. This was up from the 4.1 percent gain reported a month earlier and was the best quarter for GDP growth since the third quarter of 2014. The small upward revision was the result of higher than previously believed levels of business investment and private inventory accumulation partially offset by lower than the previously thought level of consumer spending. The sectors of the economy making positive contributions to GDP growth were (in declining order of contribution) were: personal spending (+255-basis points), fixed nonresidential investment (+107-basis points), exports (+110-basis points), government expenditures (+41-basis points), and imports (+7-basis points). Negative contributions came from private inventory accumulation (-97-basis points) and fixed residential investment (-6-basis points).

Economic growth “moderated” in July. The Chicago Fed National Activity Index (CFNAI) lost 35-basis points to +0.13 (June 2017: -0.18). Since the CFNAI is a weighted averaged 85 economic measure indexed such that a reading of 0.00 is indicative of the U.S. economy growing at its historical rate, July reading suggests the economy continued to expand during the month but at a slower pace than it had in June. Thirty-four of the 85 indicators improved during the month while 51 had weakened. The components related to production made a total contribution to CFNAI of +0.05 (versus a +0.45 contribution in June). Also making positive contributions were measures related to employment (+0.12 versus a +0.03 contribution in June) and sales/orders/inventories (+0.03 versus a +0.06 contribution in June). The measures linked to personal consumption/housing had a negative contribution of -0.07 (versus -0.06 in June). The CFNAI’s three-month moving average remained positive at +0.05 despite losing 15-basis points from June (June 2017: -0.07).

One measure of consumer sentiment surged to an 18-year high while another pulled back. The Conference Board’s Consumer Confidence Index jumped 5.5 points in August to a seasonally adjusted 133.4 (1985=100). The index has not been this high since October 2000. Measures tracking both current and expected business conditions improved—the current conditions index increased from 166.1 to 172.2 while the expectations index added 5.4 points to 107.6. 40.3 percent of survey respondents described current business conditions as “good” while only 9.3 percent see them as “bad.” Similarly, 42.7 percent of respondents saw the availability of jobs as “plentiful” with only 12.7 percent described jobs as being “hard to get.” The press release states that the strong sentiment among consumers “should continue to support healthy consumer spending in the near-term.

Meanwhile, the Index of Consumer Sentiment from the University of Michigan lost 1.7 points during August to a seasonally adjusted 96.2 (1966Q1=100), its worst reading since January. While down 6/10ths of a point from a year earlier, this was a 9/10ths of a point improvement from the preliminary August reading reported several weeks ago. The measure tracking current business conditions shed 4.1 points to its lowest points since November 2016 at 110.3 (August 2017=110.9) while the expectations index slipped by only 2/10ths of a point to 87.1 (August 2017=87.7).

Contract signings to purchase a home slipped in July. The National Association of Realtors’ Pending Home Sales Index lost 8/10ths of a point to a seasonally adjusted reading of 106.2 (2001=100), leaving the measure 2.3 percent below its July 2017 reading. The index, which tracks contracts signed to purchase a previously owned home but have not yet closed, improved during the month in the Northeast (+1.0 percent) and Midwest (+0.3 percent), but lost ground in the South (-1.7 percent) and West (-0.9 percent). The index has negative 12-month comparables in all four Census regions: West (-5.8 percent), Northeast (-2.3 percent), Midwest (-1.5 percent), and South (-0.9 percent). NAR’s press release continued to express concern about “inadequate supply” leading to many homebuyers being “unable to afford” homes in some markets.