Employers resumed adding workers in October while holds off another rate hike until (probably) December. Here are the five things we learned from U.S. economic data released during the week ending November 3.

Payrolls rebounded in October while the September jobs decline turned into a small gain. Per the Bureau of Labor Statistics, nonfarm payroll employment grew by a seasonally adjusted 261,000. This followed September’s hurricane caused weak payroll expansion of a mere 18,000 jobs. The latter represented an improvement from the previously reported estimate for September payrolls, which had shown a contraction of 33,000 jobs. Because of the revision to September’s payrolls data, employment has now grown for 85 consecutive months with nonfarm employers adding 162,000 workers on average over the past three months. The goods-producing side of the private sector economy added 33,000 workers while private service sector payrolls swelled by 219,000 workers. The most notable industry was leisure/hospitality, which added 106,000 jobs following a hit of 102,000 jobs during September. Other sectors adding significant numbers of workers were professional/business services (+50,000), health care/social assistance (+33,500), and manufacturing (+24,000). Wage growth remained weak: average weekly earnings were at $912.63, up 2.4 percent from the same month a year earlier.

A separate survey of households has the unemployment falling by 1/10th of a percentage point to 4.1 percent. This is down 7/10ths of a percentage point from a year earlier and its lowest point since December 2000. The unemployment rate was pulled down in part by the 765,000 people who had exited the labor force during the month. The resulting labor force participation rate of 62.7 percent was its lowest point since May and puts it near a 40+ year low. (Some of that reflects an aging population reaching retirement age—the labor force participation rate for adults aged 25 to 54 was at 81.6 percent, matching its year-ago rate). Falling to post-recession low is the count of part-time workers who are seeking a full-time opportunity. This count of “involuntary” part-time workers declined by 369,000 to 4.753 million (-18.8 percent versus October 2016). The typical length of unemployment decreased by 4/10ths of a week to 9.9 weeks (October 2016: 10.2 weeks). Finally, the broadest measure of labor underutilization published by the BLS (the U-6 series) dropped 4/10ths of a percentage point to 7.9 percent. The last time the U-6 series was this low was back in December 2006 (which ended up being the lowest reading for the measure during the 2001-2007 economic recovery). 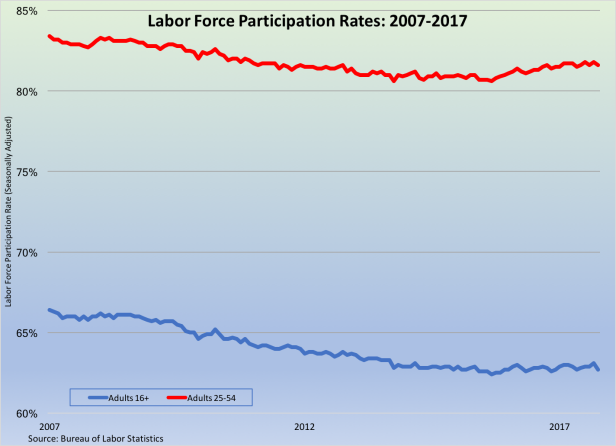 The Federal Reserve leaves its short-term interest rate target alone, for now. Minutes released following this past week’s meeting of the Federal Open Market Committee (FOMC) meeting notes that both economic activity and the labor market had continued to improve “despite hurricane-related disruptions.” This included household spending continuing to expand “at a moderate rate” and business investment that “has picked up in recent quarters.” The committee believes the hurricanes are “unlikely” to have a significant impact on economic activity over the medium term, with further strengthening of the labor market expected to continue. In this environment, the FOMC voted unanimously to keep the fed funds target rate at a range between 1.00 and 1.25 percent. The policy statement, without being explicit, would seem to indicate that we should expect a quarter point target rate bump at the FOMC’s final 2017 meeting in December. (The other Fed news of the week was President Trump’s nomination of Fed governor Jerome Powell as the new chairman of the central bank.)

Personal spending surged in September. The Bureau of Economic Analysis reports that “real” personal consumption expenditures (PCE) grew 0.6 percent on a seasonally adjusted basis during the month. This was its largest monthly gain since March. Real spending on durable goods jumped 3.5 percent while that on both nondurables and services grew a more modest 0.3 percent during September. The surge in durable goods spending is partially the result of deferred and replacement purchases following the recent hurricanes. Over the past year, real PCE has grown 2.7 percent, which includes a 7.3 percent bump up in durable goods spending. Nominal spending, which is not adjusted for inflation, jumped 1.0 percent. Both nominal personal and nominal disposable incomes grew 0.4 percent during the month. After adjusting for price variation, real disposable income was unchanged during the month and has risen 1.2 percent over the past year. The savings rate dropped by a half percentage point during September to +3.1 percent, its lowest reading since early 2008.

The trade deficit widened slightly during September. Per the Census Bureau and the Bureau of Economic Analysis, exports increased $2.1 billion during the month to a seasonally adjusted $196.8 billion (+4.6 percent versus September 2016). At the same time, imports expanded by $2.8 billion to $240.3 billion (+6.1 percent versus September 2016). The resulting trade deficit of -$43.5 billion was up $0.7 billion from August but 13.1 percent greater than that of a year ago. The goods deficit grew by $0.6 billion during September to -$65.4 billion (+10.0 percent versus a year earlier) while the services surplus shrank by $0.2 billion to +$21.9 billion (+4.4 percent versus a year earlier). Industrial supplies exports (particularly crude oil) grew by $1.9 billion while pharmaceutical preparation exports fell by $1.0 billion. Capital goods imports jumped $1.5 billion while industrial supplies/materials increased by $1.1. billion. Passenger car imports declined $0.5 billion during September. The U.S. had its biggest goods trade deficits with China (-$29.9 billion), the European Union (-$14.6 billion), Germany (-$5.9 billion), and Japan (-$5.9 billion).

Purchasing managers describe robust business activity in October. The Purchasing Managers Index (PMI) from the Institute for Supply Management shed 2.1 points during the month to a seasonally adjusted reading of 58.7. Even with the drop, this was the 14th consecutive month in which the PMI –a measure of activity in the manufacturing sector of the U.S. economy—was above a reading of 50.0, the threshold between a growing and contracting manufacturing sector. All five components of the PMI declined from September: inventories (-4.5), supplier deliveries (-3.0), new orders (-1.2), production (-1.2), and employment (-0.5). Sixteen of 18 tracked manufacturing industries expanded during October, led by paper products, nonmetallic mineral products, and machinery. The press release noted survey respondents’ comments had reflected “expanding business conditions.”

The headline index from the ISM’s Report on Business for the nonmanufacturing sector of the economy inched up by 3/10ths of a point to 60.1, measure’s highest market in its nine-year history and the 94th straight month in which it was above 50.0. Two of the index’s four components grew during the month: business activity/production (up 9/10ths of a point to 62.2) and employment (up 7/10ths of a point to 57.5). The new order index slipped 2/10ths of a point to 62.8 while the supplier deliveries measure held steady at 58.0.  Sixteen of 18 tracked service sector industries reported growth during October, led by agriculture, construction, and transportation/warehousing. The press release indicated that survey respondents continued to have a “positive outlook for business conditions.”