The latest Job Openings and Labor Turnover report finds hiring slowed during September. Here are the five things we learned from U.S. economic data released during the week ending November 10.

The pace of hiring slowed a bit in September even with the number of job openings remaining at record highs. The Bureau of Labor Statistics indicates that employers had a seasonally adjusted 6.093 million job openings at the end of September, up a mere 3,000 from August but 7.5 percent ahead of the year-ago count. Industries with substantially large year-to-year percentage gains in job openings included wholesale trade (+31.4 percent), manufacturing (+30.4 percent), transportation (+21.8 percent), and health care/social assistance (+9.8 percent). On the other hand, both the federal government (-20.6 percent) and retailers (-2.7 percent) reported having fewer open positions than they did back in September 2016. Employers hired a seasonally adjusted 5.273 million workers during September, down 147,000 from August but still up 1.8 percent from the September 2016 count. Hiring rose over the past year in manufacturing (+20.2 percent), construction (+18.9 percent), financial activities (+9.6 percent), and health care/social assistance (+6.8 percent). Hiring fell versus a year earlier in retail (-9.2 percent) and the government (-4.6 percent). 5.240 million people left their jobs during September, off 33,000 from August but still 6.0 percent ahead of the year-ago pace. The number of people who had quit their job increased by 89,000 during the month to 3.182 million (+3.4 percent versus September 2016) while layoffs slowed by 78,000 to 1.703 million (+12.3 percent versus September 2016). 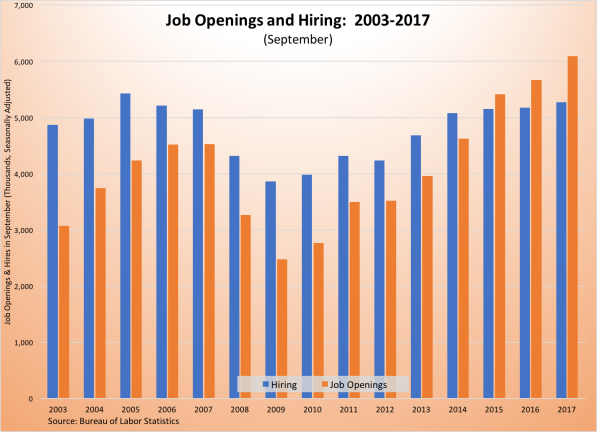 Layoff activity remained muted during the first days of November. The Department of Labor estimates there were a seasonally adjusted 239,000 first-time claims made for unemployment insurance benefits during the week ending November 4. This was up 10,000 from the prior week but down 11,000 from the same week a year ago. The four-week moving average of first-time claims slipped by 1,250 to 231,250. The four-week moving average was 9.7 percent below that of the same week a year ago. During the week ending October 21, 1.639 million people were receiving some form of unemployment insurance benefits, 8.1 percent below the count receiving the same during the same week a year earlier.

Consumers added to their debt load in September. Per the Federal Reserve, consumers had a seasonally adjusted $3.788 trillion in outstanding consumer debt (not including mortgages and other real estate backed debt) at the end of September, this was up $20.8 billion from August and 5.6 percent from a year earlier. Nonrevolving debt balances (e.g., auto and college loans) jumped by $14.4 billion to $2.782 trillion (+5.6 percent versus September 2016). Revolving debt balances (e.g., credit cards) crossed over the trillion dollar mark for the first time at $1.006 trillion. This represented a $6.4 billion bump up from August and was 5.6 percent ahead of year-ago levels.

Bankers report easing leading standards to their commercial customers during Q3. A “modest net percentage” of banks responding to the Federal Reserve’s October 2017 Senior Loan Officer Opinion Survey on Bank Lending Practices indicated that they had eased lending standards for the commercial and industrial (C&I) loans in recent months. These “eased” standards took the form of expanded credit lines, lower costs for credit lines, narrowed spreads of loan rates over the banks’ cost of funds, eased loan covenants, and lower interest spreads. Increased competition among lenders was the most significant driver for the relaxed lending standards to commercial borrowers. Banks were more likely to have maintained their current lending standards for their residential real estate loan offerings while tightening standards and terms on credit cards and car loans. Demand for residential real estate loans, credit cards, and auto loans all have weakened during the past quarter.