Economic growth during the 1st 3 months of 2016 was abysmal, but last week also gave us good news on manufacturing, the housing market and consumer sentiment. Here are the 5 things we learned from U.S. economic data released during the week ending May 27.

The 2nd estimate for Q1 economic growth was not much better than the previously released estimate. The Bureau of Economic Analysis revised its Q1 gross domestic product (GDP) estimate, finding that the U.S. economy grew 0.8% on a seasonally adjusted annualized rate as opposed to a 0.5% growth rate that had been reported a month earlier. Even with the small upward revision—largely due to higher than previously estimated levels of private inventory accumulation, fixed residential investment (housing) and net exports—economic growth was at its slowest pace in a year. Only 3 major components
of the economy made positive contributions to GDP growth: consumption, fixed residential 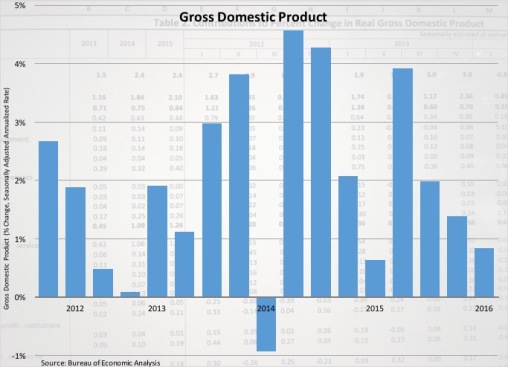 investment and the government. Fixed nonresidential investment, private inventory accumulation and net exports were all drags on Q1 economic growth. Meanwhile, corporate profits from current production (that is, with inventory valuation and capital consumption adjustments) grew for only the 2nd time in 6 quarters with a 0.3% gain.

Durable goods orders grew for a 2nd consecutive month in April. The Census Bureau estimates new orders for manufactured durable goods totaled a seasonally adjusted $235.9 billion during the month. This was up 3.4% for the month and 1.5% from April 2015. Much of the gain came from a jump in civilian aircraft orders, which surged 64.9% and a 2.9% gain in orders for motor vehicles. But even net of transportation goods orders, durable goods orders expanded for the 3rd time in 4 months with a 0.4% increase. Among goods categories enjoying new orders gains were computers (+6.9%), fabricated metal products (+3.1%), communications equipment (+1.0%) and electrical equipment/appliances (+0.5%). But all was not good, however. Orders for civilian capital goods net of aircraft (a proxy for business investment) slowed 0.8% and new orders for machinery dropped 1.9%.

Sales of new homes jumped to a post-recession high in April. Following several months of relative stagnation, new home sales surged 16.6% during the month to a seasonally adjusted annualized rate of 619,000 units. This was up 23.8% from a year earlier and was the highest point since January 2008 for the Census Bureau data series. Sales were up for the month in the Northeast (+52.8%), West (+18.8%) and South (+15.8%) but slipped 4.8% in the Midwest. Homebuilders continued maintaining tight inventories of new homes. The 243,000 new homes available for sale at the end of April was off 0.4% from March and equivalent to a 4.7 month supply. The median sales price of $321,100 was up 9.7% from a year earlier (although it is worth noting that home price comparisons can be tricky because the housing stock can vary significantly over time)

Buyers signed sales contracts to purchase existing homes during April at a pace not seen in 10 years. The Pending Home Sales Index from the National Association of Realtors added 5.6 points to a seasonally adjusted reading of 116.3 (2001 = 100). This was up 5.1 points from the April 2015 reading and was the highest point since February 2006 for the measure of signed contracts to purchase a previously owned home. Much of the month’s gains came from large gains in the West (+11.4%) and the South (+6.8%), while the index edged up 1.2% in the Northeast and slipped 0.6% in the Midwest. The index had positive 12-month comparables in all 4 Census regions. The press release notes that sales were a bit above expectations even with “affordability stresses and inventory squeezes affecting buyers in a number of markets.”

Consumer confidence hit a 1.5 year high in May, according to one survey. The University of Michigan’s Index of Consumer Sentiment jumped 5.7 points for the month to a seasonally adjusted reading of 94.7 (1966 Q1 = 100). While this was off 1.1 points from the preliminary May report released a few weeks ago, it was the highest final reading since December 2013 with only 4 months over the past 110 having a better reading than that reported for May. The current conditions index hit a post-recession high with a 3.2 point bump to 109.9 while the expectations index surged 7.3 points to 84.9. The press release attributes the strong survey results to “increased jobs and incomes as well as low inflation and interest rates,” along with higher home values. The researchers also said that the survey data suggests “real” consumption will growth 2.5% in 2016 and 2.7% in 2017.