May was the worst month for job creation since the summer of 2010. Meanwhile, consumers were spending their increased disposable income. Here are the 5 things we learned from U.S. economic data released during the week ending June 3.

Hiring activity slowed to a crawl in May. While the month’s employment report from the Bureau of Labor Statistics had been expected to be soft due to the now-settled strike at Verizon, the report’s broad weakness was surprising. Not only did nonfarm employers add only 38,000 jobs during the month (the smallest single-month increase since the fall of 2010), the BLS lowered its payroll estimates for March and April by a total of 59,000 jobs. The private sector added a mere 25,000 jobs, split by a 61,000 gain for the service sector and a 36,000 job contraction for the goods producing side of the private sector economy. The largest payroll gains occurred with health care/social assistance (+55,400), retail (+11,400), leisure/hospitality (+11,000) and financial activities (+8,000). Employment contracted in information (-34,000, again largely due to the now settled Verizon strike), temporary help services (-21,000), construction (-15,000), mining/logging (-11,000), wholesale trade (-10,300) and manufacturing (-10,000). 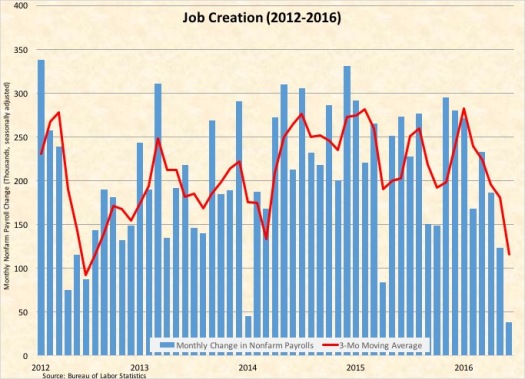 Holding steady was the average workweek (at 34.4 hours) while the average for weekly earnings of $880.30 was up a modest 2.2% from a year earlier.

The separate survey of household found the unemployment rate dropped to another post-recession low of 4.7% (vs. 5.0% in April and 5.5% in May 2015). But the same survey also found household employment growing by a tepid 26,000 people and that 458,000 people exited the labor force during the month. The latter resulted in the labor force participation rate slipping by 2/10ths of a percentage point to 62.6%, which puts it back to a 39-year low that it has touched recent months. The household survey also found the count of part-time workers seeking a full-time job rising by nearly ½ million to 6.430 million people, the median length of unemployment falling to another post-recession low of 10.7 weeks (vs. 11.6 weeks in May 2015), and the BLS’ broadest measure of labor underutilization holding steady at 9.7% (vs. 10.7% in May 2015).

So, what is one to take away from this report? It should be noted that this data series can be subject to significant revision, so it is possible that the May numbers will improve in the coming months. Further, the drop in information employment will rebound in June as striking Verizon workers have returned to work. But still, it does appear that May was a soft month for the labor market, but one should always caution to not overact as one month’s data does not by itself reflect a trend.  But if there is one thing for certain, a rate hike is surely off the table for the Federal Open Market Committee meeting later this month.

Consumer spending jumped in April. The Bureau of Economic Analysis reports that “real” personal consumption expenditures (PCE) increased 0.6% during the month, the largest single-month gain in nearly a year and an improvement from the 2 months of the previous 3 that saw no growth. Consumer expenditures were up 3.0% over the past year, its best 12-month comparable since last September. Real spending on goods increased 1.2%, including a robust 2.2% surge in spending for durable goods reflecting a large gain for automobiles (+5.4%). Consumer spending on nondurables grew 0.7%, including an increase of 1.3% for apparel. Spending on services improved by 0.4% during the month. The increased consumer spending was funded by a 0.4% gain in nominal personal income and a 0.5% advance in disposable income, the latter dropping to a 0.2% increase after adjusting for inflation. Real disposable income has increased 3.3% over the past year. The saving rate dropped by a ½ percentage point to +5.4%, its lowest point of the year.

Purchasing managers report slightly faster growth in manufacturing but slower expansion for the service sector during May. The Purchasing Managers’ Index (PMI) from the Institute for Supply Management added a half point during the month to a seasonally adjusted reading of 51.3. This was the 3rd straight month in which the PMI was above a reading of 50.0, indicative of a manufacturing sector that is expanding. One of the index’s 5 components improved during the month: supplier deliveries added 5.0 points to 54.1. Declining during the month were indices for production (off 1.6 points to 52.6), inventories (off ½ point to 45.0) and new orders (off 1/10th of a point to 55.7). The employment index was unchanged at 49.2, its 6th straight month with a reading below 50.0. 12 of 18 tracked manufacturing industries expanded during the month, led by wood products, textile mills and printing.

Meanwhile, the ISM’s measure of nonmanufacturing business activity slumped 2.8 points to a seasonally adjusted 52.9, its lowest reading since February 2014. Falling were index components for new orders (down 5.7 points to 54.2), business activity (down 3.7 points to 55.1) and employment (down 3.3 points to 49.7) while the index for supplier deliveries added 1.5 points to 52.5. 14 of 18 tracked service sector industries enjoyed increased business activity during the month; including, health care/social assistance, accommodation/food services and utilities. The press release noted the survey results and comments received reflected “a cooling-off and slowing in momentum from the previous months of growth for the non-manufacturing sector.”