The Fed held still but sent a more dovish signal. The statement released after this past week’s meeting of the Federal Open Market Committee (FOMC) noted that the U.S. economy was growing at a “moderate rate,” the labor market was “strong,” and that consumer spending had “picked up.” But the committee also saw business investment as being “soft” and that core inflation was remaining below its two-percent target rate. As a result, the FOMC voted to maintain the fed funds target rate at a range between 2.25 and 2.50 percent (one voting member desired a rate cut). Further, the statement turned dovish with language saying that uncertainties “have increased. Nevertheless, the committee believed “sustained expansion of economic activity, strong labor market conditions, and inflation near the Committee’s symmetric 2 percent objective as the most likely outcomes.” Notable in the economic projections released in conjunction with the policy statement was that eight of the 17 FOMC participants expects one or two quarter-point rate cuts before 2019 ends. Only one participant anticipates a rate bump in 2019. Further, seven FOMC participants have the fed funds target rate below the current range into 2021. 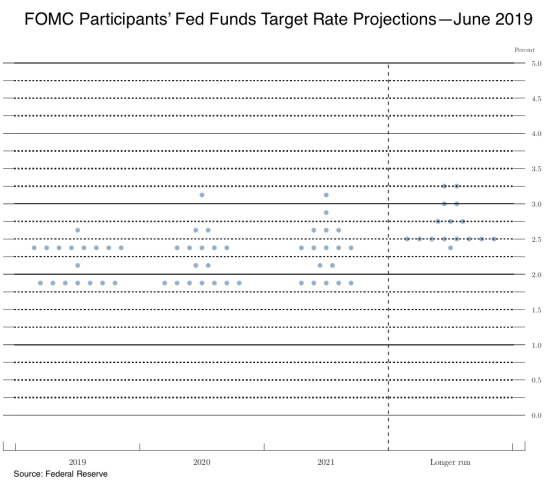 Forward-looking economic indicators suggest business activity mellowed in May. The Conference Board’s Leading Economic Index (LEI) held steady at 118.1 for the month and has risen by only a half point since last December. Just five of the LEI’s ten components made a positive contribution to the measure, led by consumers’ expectations for business conditions. The coincident index added 2/10ths of a point to 105.9, up a mere 3/10ths of a point since last December. All four coincident index components made positive contributions to the measure. The lagging index pulled back by 2/10ths of a point to 107.0 (up 7/10ths of a point to 106.3), with only one of seven components improving during May (the ratio of consumer installment credit outstanding to personal income). The press release noted that the LEI’s reading “clearly points to a moderation in growth towards 2 percent by year end.”

Existing home sales grew for the first time in three months in May. Sales of previously owned homes increased 2.5 percent during the month to a seasonally adjusted annualized rate of 5.34 million units. Even with the gain, the National Association of Realtors’ measure of existing home sales was 1.1 percent under its year-ago pace. Sales increased in all four Census regions, led by increases of 4.7 percent and 3.4 percent in the Northeast and Midwest, respectively. The only region with a favorable 12-month comparable, however, was the South with a 1.3 percent gain. Inventories of unsold homes expanded to their largest level since last July to 1.92 million units (+4.9 percent versus April 2019 and +2.7 percent versus May 2018) but remained at a tight 4.3 month supply. The press release stated that “[t]he purchasing power to buy a home has been bolstered by falling mortgage rates, and buyers are responding.”

Starts of single-family homes slowed in May. The Census Bureau tells us housing starts slipped 0.9 percent during the month to a seasonally adjusted 1.269 million units, representing a 4.7 percent drop from a year earlier. While starts of multi-family units (e.g., condos) jumped 13.8 percent on both a month-to-month and year-to-year basis, they dropped for single-family homes 6.4 percent versus April 2019 and 12.5 percent versus May 2018. Looking towards future activity, permitting activity inched up during May as the annualized count of issued building permits grew 0.5 percent to 1.294 million permits (-1.5 percent versus May 2018). Permits for single-family homes rose 3.7 percent but fell a matching 3.7 percent for permits of homes with five or more units. Housing completions slumped 9.5 percent during the month to an annualized 1.213 million units, a 2.8 percent decline from a year earlier

Only one state enjoyed significant jobs growth in May. The Bureau of Labor Statistics reports that nonfarm payrolls grew at a statistically significant rate in only Washington state during the month while remaining “essentially” unchanged in the other 49 states and the District of Columbia. (Note a few weeks earlier, the BLS reported that nonfarm payrolls grew by a relatively modest 75,000 jobs on a seasonally adjusted basis during May.) Over the past year, nonfarm payrolls have increased in 24 states, led by Texas (+286,300), California (+282,700), and Florida (+214,500).