Factories were more active as 2018 wrapped up, but consumer sentiment softened in the early days of 2019. Here are the five things we learned from U.S. economic data released during the week ending January 18.

Note that the partial shutdown of the federal government has and will delay the release of certain economic data reports.

Manufacturing output surged in December. The Federal Reserve reports that manufacturing production jumped a seasonally adjusted 1.1 percent during the month, its biggest gain since last February and leaving output up 3.2 percent over the past 12 months. Durable goods production blossomed by 1.3 percent, boosted by significant gains for motor vehicles, nonmetallic mineral products, wood products, aerospace, and computers/electronics. Production of nondurables increased 0.9 percent, pulled up by petroleum/coal products and food/beverage/tobacco goods. Manufacturing output has grown by 3.2 percent over the past year. Overall industrial production gained 0.3 percent during December and had expanded 4.0 percent since December 2017. Mining output jumped 1.5 percent for the month and had swelled 13.4 percent over the past year (boosted by oil and gas extraction). Relatively moderate weather in December led to a 6.3 percent drop in output at utilities (-4.3 percent versus December 2017). 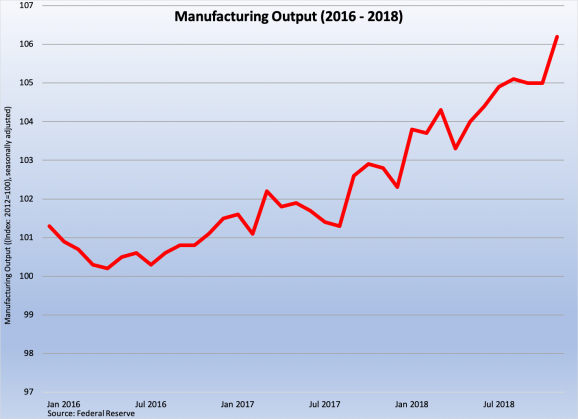 Wholesale prices fell in December. The Producer Price Index (PPI) for final demand dropped by 0.2 percent on a seasonally adjusted basis during the month. This was the first decline in the Bureau of Labor Statistics’ wholesale price measure since February 2017. The core measure of wholesale prices, which removes the impact of energy, food and trade services, was unchanged in December. PPI for energy plummeted by 5.4 percent (slightly greater than November’s 5.0 percent drop) as gasoline prices fell 13.1 percent. PPI for final demand food swelled 2.4 percent, as prices for fresh fruit surged 48.9 percent. PPI for final demand services contracted by 0.1 percent, pulled down by lower prices for trade services (-0.3 percent) and transportation & warehousing (-0.2 percent). For all of 2018, final demand PPI has risen 2.5 percent while the core measure gained 2.8 percent.

Many issued weighed heavily on consumers during the opening days of the new year. The preliminary January reading of the University of Michigan’s Index of Consumer Sentiment came in at 90.7, 7.6 points below the final December reading, five full points below the January 2018 mark, and its lowest reading since 2016. The current conditions slumped by 6.1 points to 110.0 (January 2018: 110.5) while the expectations index plummeted by 8.7 points to 78.3 (January 2018: 86.3). The press release noted that survey respondent’s “year-ahead outlook for the national economy [was] judged the worst since mid 2014,” blaming the greater pessimism on the “partial government shutdown, the impact of tariffs, instabilities in financial markets, the global slowdown, and the lack of clarity about monetary policies.” Look for the release of final January sentiment figures on February 1.

Homebuilder confidence slightly rebounded in January. The Housing Market Index (HMI) added two points during the month to a seasonally adjusted reading of 58. Even with its first increase since October, the National Association of Home Builders’ measure is 14 points below its January 2018 mark. Nonetheless, this was the 55th consecutive month with an HMI above a reading of 50, indicative of a higher percentage of homebuilders saying the housing market was “good” as opposed as being “poor.” The HMI improved in two Census regions (Northeast, up 12 points to 48, and West, up five points to 70), was steady in the South (at 61), and shed three points in the Midwest (49). Improving from January were indices for current sales of single-family homes (up two points to 63), expected sales of new homes (up three points to 64), and traffic of prospective buyers (up a point to 44). The press release stated that “the gradual decline in mortgage rates in recent weeks helped to sustain builder sentiment.”