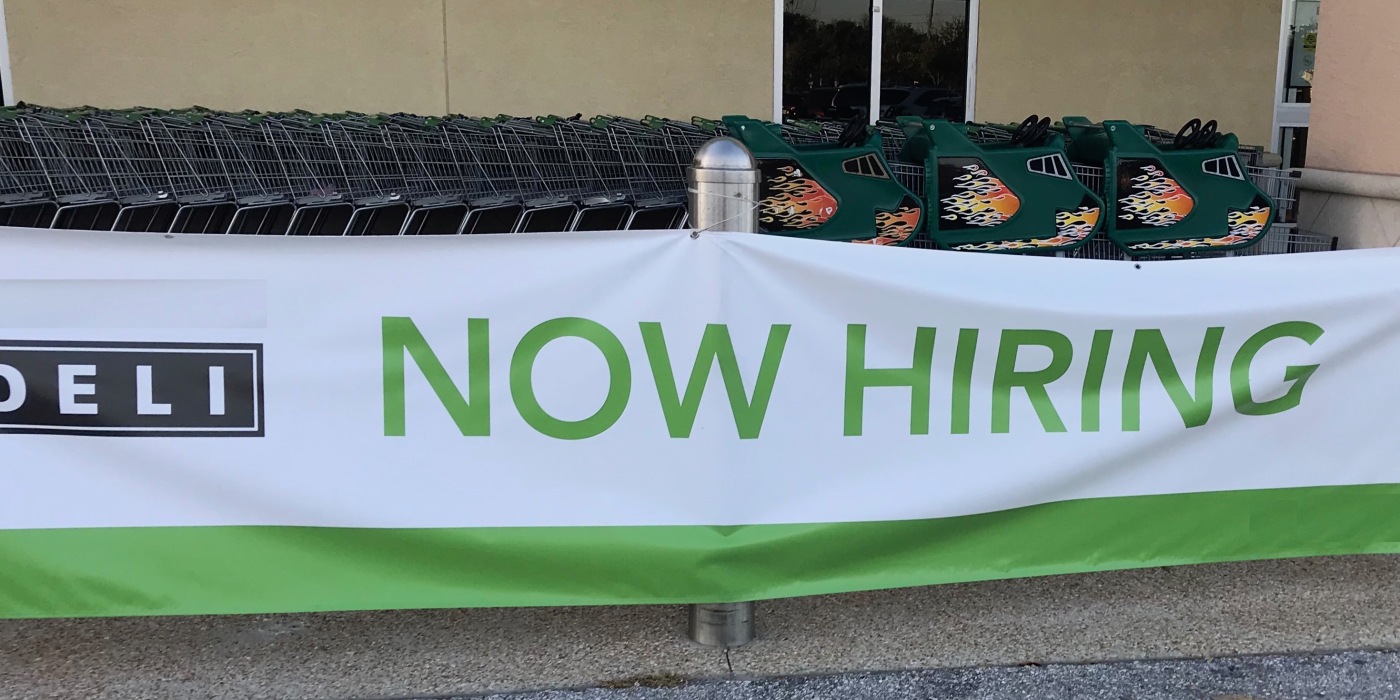 Payroll growth slowed down while the trade deficit widened (again). Here are the five things we learned from U.S. economic data released during the week ending April 6.

Employers added fewer workers in March. Nonfarm payrolls expanded by a seasonally adjusted 103,000 during the month, per the Bureau of Labor Statistics. Even though this was the fewest jobs added in a single month since last September and less than one-third of February’s job gain (+326,000), this represented the 90th consecutive month of job creation. Private sector employers added 102,000 jobs in March versus a mere 1,000 new government jobs. The former was split between 15,000 jobs in the goods-producing side of the economy and 87,000 in the service sector. The industries adding the most jobs during the month were: health care/social assistance (+33,800), professional/business services (+33,000), manufacturing (+22,000), and wholesale trade (+11,400). Shedding workers (at least on a seasonal basis) were the construction sector (-15,000) and retailers (-4,400). The average workweek remained at 34.5 hours (March 2017: 34.4 hours) while average weekly earnings grew by $2.76 during the month to $925.29 (+3.3 percent versus March 2017).

Based on a separate survey of households, the unemployment rate remained at its post-recession low of 4.1 percent for a sixth straight month. The labor force contracted by 158,000 to 161.7 million people, resulting in the labor force participation rate slipping by 1/10th of a percentage point to 62.9 percent. The labor force participation rate for adults aged 25-54 held steady for the month at 82.2 percent. The median length of someone being out of work shrank by 2/10ths of a week to 9.1 weeks (matching the post-recession low hit back last December) while the count of part-time workers seeing a full-time opportunity contracted by 141,000 to 5.019 million (March 2017: 5.500 million). The broadest measure of labor underutilization (the “U-6” series) declined by 2/10ths of a percentage point to 8.0 percent, matching last November as its post-recession low reading. 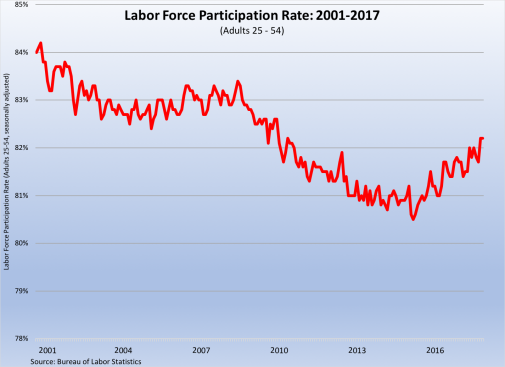 The trade deficit widened to a nearly decade-long high in February. The Census Bureau and the Bureau of Economic Analysis report that exports increased $3.5 billion to $204.4 billion (+6.6 percent) while imports swelled by $4.4 billion to $262.0 billion (+10.9 percent). As a result, the U.S. trade deficit expanded by $0.9 billion to -$57.6 billion. The deficit was 29.6 percent larger than it was during the same month a year earlier and its widest since October 2008. The goods deficit grew by $0.4 billion to -$77.0 billion (+17.9 percent versus February 2017) while the services surplus narrowed by $0.7 billion to +$19.4 billion. Highlights of the former included a $3.1 billion gain in exported goods (thanks to higher exports of industrial supplies/materials, automobiles, and capital goods) and a $3.3 billion increase in imported goods (including capital goods, crude oil, and food/feed/beverages). The U.S. had its largest goods deficits with China (-$34.7 billion), the European Union (-$15.3 billion), Germany (-$6.7 billion), Mexico (-$6.6 billion), and Japan (-$6.0 billion). The goods deficit with Canada was a far more modest -$0.4 billion.

Transportation goods drove up factory orders during February. The Census Bureau estimates new orders for manufactured goods increased 1.2 percent to a seasonally adjusted $498.0 billion (+7.1 percent versus February 2017). As noted with the prior week’s durable goods report, transportation goods orders jumped 7.0 percent, with large gains for defense aircraft (+34.8 percent), ships (+30.6 percent), civilian aircraft (+26.2 percent), and motor vehicles (+1.5 percent). Net of transportation goods, new orders edged up 0.1 percent during the month and were 6.4 percent ahead of February 2017 levels. Growing during the month were orders for electrical equipment/appliances (+3.4 percent), primary metals (+2.8 percent), and machinery (+1.2 percent). Losing ground during the month were orders for nondurable goods (-0.5 percent) and computers/electronics (-0.1 percent). Shipments grew for the 14th time in 15 months, increasing 0.9 percent to $249.8 billion. Unfilled orders grew for the fourth time in five months (+0.2 percent to $1.143 trillion) while inventories expanded for the 15th time in 16 months (+0.3 percent to $675.2 billion).

Purchasing managers report slightly slower growth in business activity during March. The Institute for Supply Management’s Purchasing Managers Index (PMI) lost 1.5 points to a reading of 59.3. Even with the drop, this was the 19th straight month in which the PMI was above a reading of 50.0, indicative of an expanding manufacturing sector. All five PMI components declined from their February readings (in order from largest to smallest decline): employment, new orders, inventories, production, and supplier deliveries. Seventeen of 18 tracked manufacturing sectors expanded during March, led by fabricated metal products, plastics/rubber products, and computers/electronics.

The ISM’s measure of service sector activity (NMI) dropped by 7/10ths of a point to 58.8. This was the measure’s 98th straight month being above the 50.0 expansion/contraction threshold. Two of four NMI components improved from the February readings—supplier deliveries and employment—while two others (new orders and business activity/production) contracted. Respondents from 15 of 18 tracked service sector industries reported growth during the month, led by mining, transportation/warehousing, and agriculture. The press release noted that a “majority of respondents remain positive about business conditions.”