Business activity appears to be firming during the final months of 2017. Here are the five things we learned from U.S. economic data released during the week ending November 24.

Forward-looking economic data suggest robust economic growth in the coming months. The Conference Board Leading Economic Index (LEI) jumped by 1.5 points during October to a reading of 130.4 (2010=100). This was up a sharp 5.2 percent from a year earlier. Nine of the ten components of the LEI made a positive contribution during the month, led by jobless claims, building permits, and new orders for manufactured goods. The coincident index added 4/10ths of a point to 116.2, +1.9 percent versus October 2017. All four components of the coincident index made positive contributions, including industrial production and nonfarm payrolls. The lagging economic index added 3/10ths of a point to 125.5, up 2.5 percent from October 2016. Four of seven index components made positive contributions; including, the average duration of unemployment and the change in prices for services. The press release said that “[t]he growth of the LEI, coupled with widespread strengths among its components, suggests that solid growth in the US economy will continue through the holiday season and into the new year.”

Economic activity picked up during October. The Chicago Fed National Activity Index (CFNAI) gained 29-basis points to +0.65. This was the best reading for the index of 85 economic indicators since January 2012. The CFNAI is set so that a reading of 0.00 indicates economic growth at the historical average. Forty-three of the 85 indicators improved during the month, but only one of the four major categories of indicators gained during the month: production-related indicators made a +0.53 contribution, up from +0.18 in September. Indicators related to employment (off two-points to +0.11), sales/orders inventories (off three basis points to +0.05), and consumption/housing (off two-basis points to -0.04) all made smaller contributors than they had during September. The CFNAI’s three-month moving average jumped by 27-basis points to +0.28, its highest reading since April 2014. 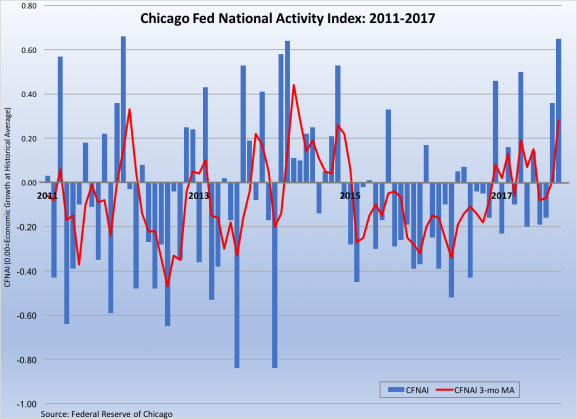 Existing home sales gained in October. Sales of previously owned homes grew 2.0 percent during the month to a seasonally adjusted annualized rate (SAAR) to 5.48 million units, according to the National Association of Realtors. While this was off 0.9 percent from the sales pace of a year earlier, existing home sales have remained within a tight mid-five million range for the past year. Sales grew in all four Census regions during the month, but the 12-month sales comparable was only positive in the West. Holding back sales was the continued relative lack of homes on the market. Just 1.80 million homes were available for sale at the end of October, down 3.2 percent from September, 10.4 percent from a year earlier, and represented only a 3.9 month supply. The press release noted that homes typically stayed on the market for 34 days in October, down from 41 days during October 2016. As a result, the median sales price rose 5.5 percent over the past year to $247,000.

Durable goods orders fell during October. The Census Bureau estimates new orders for manufactured durable goods were at a seasonally adjusted $236.0 billion during the month, down 1.2 percent from September. Much of the decline reflects the 18.6 percent drop in new orders for civilian aircraft and the 11.3 percent slump in new orders for defense aircraft. Overall transportation orders fell 4.3 percent (new orders for motor vehicles grew 1.7 percent during the month). Net of transportation goods, new durable goods gained 0.4 percent during October to $158.9 billion. New orders grew during the month for primary metals (+1.3 percent), electrical equipment/appliances (+0.8 percent), machinery (+0.6 percent), computers/electronics (+0.4 percent). Orders for fabricated metal products fell 0.9 percent while those of civilian, non-aircraft capital orders (a proxy of business investment) dropped 0.5 percent. Shipments of durable goods edged up 0.1 percent to $241.0 billion (its fifth gain in six months). The dollar value of unfilled orders was essentially unchanged at $1.135 trillion while inventories increased for the 15th time in 16 months (+0.1 percent to $404.1 billion).

Consumer sentiment softened slightly but remained firm during November. The University of Michigan’s Index of Consumer Sentiment lost 2.2 points during the month to a seasonally adjusted reading of 98.5 (1966Q1=100). Despite declining from October, this reading was a 7/10ths of a point improvement from the preliminary November number reported a few weeks earlier and a 4.7 point increase over the past year. Both the current and expected conditions indices slipped from their October marks: the former lost 3.0 points to 113.5 (November 2016: 107.3) while the latter decreased by 1.6 points to 88.9 (November 2016: 85.2). The statement released with the report notes that “consumers have voiced greater certainty about their expectations for income, employment, and inflation” and that the data is consistent with “an expected gain of 2.7% in real consumption expenditures in 2018.”