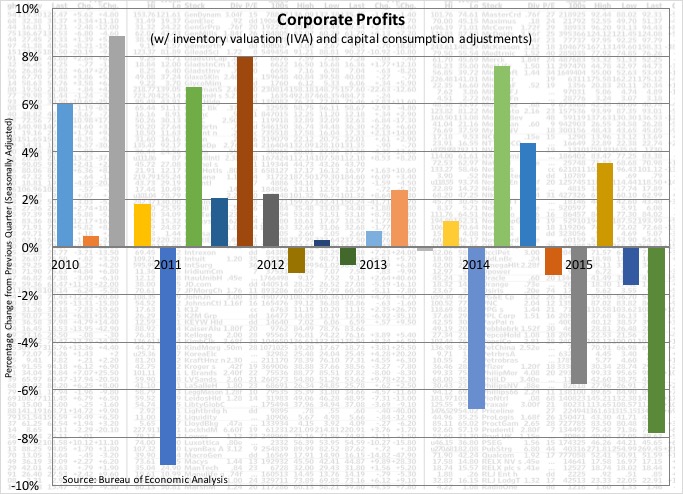 While GDP was a bit better than previously believed during the final days of 2015, housing and manufacturing data has the economy crawling early this year. Here are the 5 things we learned from U.S. economic data released during the week ending March 25.

Even with another upward revision, Q4 economic activity was unexceptional. The Bureau of Economic Analysis originally estimated Gross Domestic Product (GDP) grew at a seasonally adjusted annualized rate of 0.7% and then raised the growth estimate to +1.0% last month. The newest and “final” revision released this past week puts economic growth during the final 3 months of 2015 at +1.4%. This was still below Q3’s 2.0% growth rate and Q2’s expansion of +3.9% and leaves GDP growth for all of 2015 at +2.4%, matching 2014’s moderate rate of expansion. The latest upward revision to Q4 GDP was the product of higher than previously believed levels of personal spending and exports. In the same report, we learn that corporate profits plummeted 7.8%, its 4th drop in 5 quarters.

This was the largest quarterly percentage drop in corporate profits (after adjustments for inventory valuations and capital consumption) since Q1 2011. Next month, we will get the 1st estimate of Q1 GDP, with current data suggesting that economic growth has continued to muddle along.

For example, it appears that economic growth slowed in February. The Chicago Fed National Activity Index (CFNAI) dropped 70-basis points to a reading of -0.29. February’s loss essentially gave back January’s gain and represented the 6th month over the past 7 in which the CFNAI was negative. The 85 economic indicators that make up the CFNAI are categorized into 4 groups, all of which deteriorated from their January readings. Falling sharply from the previous month were indicators associated with production/income (down 50-basis points to -0.21) and employment (off 16-basis points to +0.03) while measures for consumption/housing (off 4-basis points to -0.09) and sales/orders/inventories (off a point to -0.03) slipped more modestly. Even with February’s sharp reversal, the CFNAI’s 3-month moving average improved by 5-basis points to -0.07. This was the 5th straight month in which the moving average was negative (albeit its best reading since last September), indicative of a U.S. economy growing at a below its historic trend rate.

Sales of previously owned homes slumped during February. Existing home sales declined 7.1% during the month to a seasonally adjusted annualized rate (SAAR) of 5.08 million units. Even with the drop, the National Association of Realtors reports that sales were still 2.2% above that of a year earlier. Sales activity slowed in all 4 Census regions, led by double digit percentage declines in the Northeast (-17.1%) and the Midwest (-13.8%). On the flipside, sales were above their year ago levels in 3 of 4 Census regions, with sales holding steady with their February 2015 pace in the Midwest. NAR attributes the sales weakness to continuing tight inventories. There were 1.88 million homes available for sale at the end of February, the equivalent to a 4.4 month supply. The resulting median sales price for homes sold during the month of $210,800 was 4.4% above year ago levels. Beyond tight inventories, the press release cites the January blizzard in the east coast and stock market volatility as “play[ing] a role in February’s lack of closings.”

Durable goods orders weakened in February as January’s show of strength was fleeting. The Census Bureau reports new orders for durable goods dropped by $6.6 billion to a seasonally adjusted $229.4 billion (+1.8% vs. February 2015). Orders for transportation goods fell 6.2%, including sizable drops for the typically volatile data series for both civilian (-27.1%) and defense aircraft orders (-29.2%). Orders for motor vehicles grew 1.2%. Net of transportation goods, core durable goods orders dropped 1.0% during the month and were 0.5% below their year ago pace. Falling were orders for electrical equipment/appliances (-2.8%), machinery (-2.6%), fabricated metal products (-1.2%) and computers/electronics (-0.9%). Business investment, as measured by new orders for nondefense capital goods net of aircraft, dropped 1.8% during February. Also falling during the month were shipments of durable goods (-0.9%), non-transportation durable goods (-0.7%) and nondefense capital goods net of aircraft (-1.1%).