In a rather light week for economic data, we saw the trade deficit zoom up but jobless claims fall to a 42-year low.  Here are the 5 things we learned from U.S. economic data released during the week ending October 9.

A jump in imports and a drop in exports in August led to the largest trade deficit since March. The Census Bureau and the Bureau of Economic Analysis estimate exports declined by $3.7 billion to $185.1 billion (-6.2% vs. August 2014) and that imports increased by $2.8% billion to $233.4 billion (-2.2% vs. August 2014). The resulting seasonally adjusted trade deficit of -$48.3 billion was 17.1% larger than the deficit in August 2014. The goods deficit zoomed up $6.6 billion to -$67.9 billion while the services surplus inched up $0.1 billion to +$19.6 billion. Exports of industrial supplies and materials (including fuel, plastic materials and crude oil) declined by $2.2 billion while imports of consumer goods grew by $2.1 billion. The average price of imported crude oil—$49.33—was down $4.87 a barrel from July and 46.7% 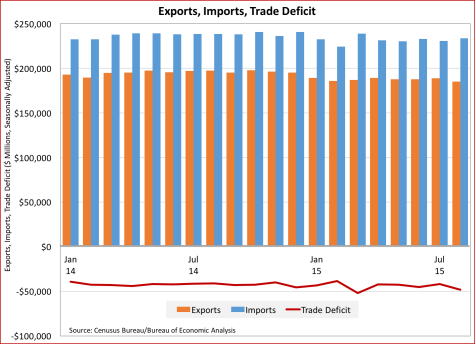 There were fewer first-time jobless claims made during early October than seen in any week since 1973. The seasonally adjusted estimate of first-time claims for unemployment insurance benefits of 263,000 for the week ending October 3rd was the 31st consecutive week in which the Department of Labor data series has been below 300,000. The 4-week moving average for the week dropped by 3,000 to 267,500 claims. A year earlier, the moving average was at 291,250. There were 2.204 million people receiving some form of unemployment insurance benefits during the week ending September 26, up 9,000 from the previous week. The 4-week moving average for the continuing claims measure of 2.222 million was down 8.7% from the same week a year earlier.

The service sector grew at a slower pace during September. The headline index from the Non-Manufacturing Report on Business from the Institute for Supply Management shed 2.1 points during the month to a seasonally adjusted 56.9. This was the 68th straight month in which the measure was above a reading of 50.0, the threshold between an expanding and contracting service sector. Two index components fell during the month (business activity, new orders), 1 was unchanged (supplier deliveries) and 1 improved (employment). Thirteen of 18 tracked service sector industries improved during the month, led by education, construction, finance/insurance and health care/social assistance. The press release noted that survey “respondents continue to remain positive about current business conditions.”

Import prices fell for the 11th time in 13 months during September. The Bureau of Labor Statistics estimates import prices slipped 0.1% during the month and were 10.7% below prices of a year earlier. (Note that unlike the BLS reports on consumer and wholesale prices, this data series is not adjusted for typical seasonal variations.) The price of imported fuel grew for the 1st time in 3 months with a 1.4% gain (but nevertheless was 44.7% below year ago levels). Prices for imported natural gas blossomed 9.3% while those for imported petroleum increased 1.1%. Net of fuel, import prices contracted 0.3%, which was the 15th straight month the nonfuel metric did not increase and resulted in a 12-month comparable of -3.1%. Among the product categories pushing down nonfuel import prices were nonfuel industrial supplies, foods/feeds/beverages and capital goods.

Meanwhile, export prices declined 0.7% for the month and were 7.4% below that of a year earlier. Falling during the month were prices for exported agricultural goods, nonagricultural industrial supplies, consumer goods and automotive vehicles.

Consumer debt grew in August at its slowest pace since January. The Federal Reserve’s estimate of outstanding non-real estate backed consumer debt grew by $16.0 billion during the month to $3.470 trillion. This was up 6.8% from a year earlier. Slowing has been the growth rate of outstanding nonrevolving debt (e.g., college loans, car loans), with outstanding balances growing $12.0 billion to $2.551 trillion (+$12.0 for the month and +7.7% vs. August 2014 levels). The latter was the smallest 12-month comparable since March 2014. Meanwhile, consumers are slowly using their credit cards more. Revolving credit balances expanded by $4.0 billion to $918.5 billion (+4.2% vs. August 2014, its biggest 12-month comparable since August 2008).

Other data released over the past week that you might find of interest:
–Wholesale Inventories  (August 2014, seasonally adjusted): $583.7 billion, +0.1% vs. July, +4.1% vs. August 2014.
–Minutes from the September meeting of the Federal Open Market Committee