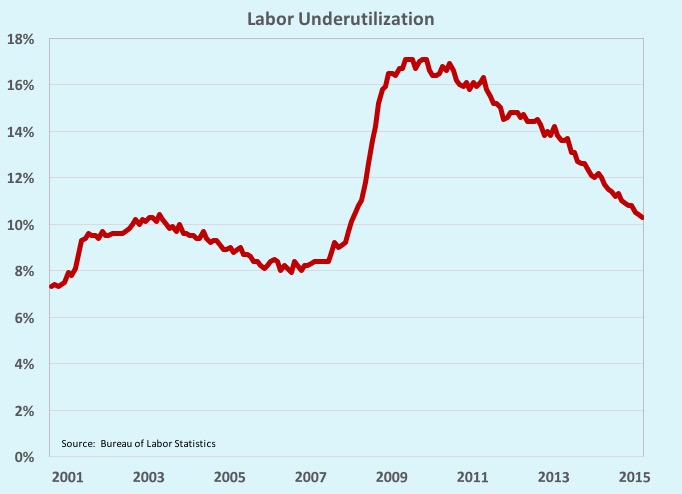 The August payrolls report disappointed, but the labor market may not be as bad as the numbers imply.  Here are the 5 things we learned from U.S. economic data released during the week ending September 4.

The pace of job creation in August was below forecast, but upward revisions appear likely. The Bureau of Labor Statistics reported on Friday that nonfarm employers added 173,000 jobs during August, below the low +200k consensus forecast. Some analysts point out that August payrolls data tend to be subject to significant upward revisions because the survey that is the backbone of the report suffers from particularly weak response rates late in the summer (the August survey had only a 69.9% response rate). We shall see, but for now August had the slowest pace of job creation since March. The good news is that the BLS upwardly revised its estimates of June and July payrolls by a total of 44,000 jobs. 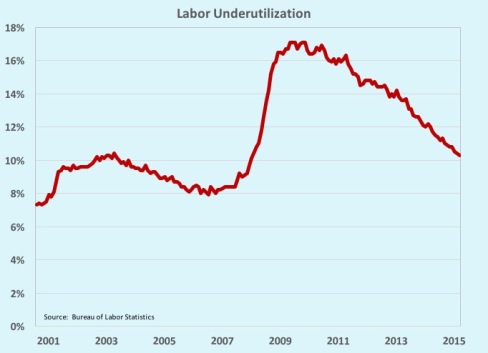 A separate survey of households puts the unemployment rate at 5.1%, down 2/10ths of a percentage point from July and its lowest reading since August 2008. 41,000 people exited the labor force during the month, keeping the labor force participation rate at its nearly 4-decade low of 62.6%. A few other tidbits from the household survey include: the median length of unemployment growing by 8/10ths of a week to 12.1 weeks (vs. 13.3 weeks in August 2014) and the broadest measure of labor underutilization slipping 1/10th of a point to 10.3%. While this compares well with the 12.0% reading of a year ago and the peak recession reading of 17.1%, it remains above the 8% to 9% readings of the previous economic recovery. One reason: the count of part-time workers seeking a full-time job remains high.

A small gain in exports and fewer imports led to a smaller trade deficit in July. According to the Bureau of Economic Analysis/Census Bureau, exports edged up $0.8 billion to $188.5 billion while imports slowed $2.5 billion to $230.4 billion. The resulting seasonally adjusted trade deficit of -$41.863 billion was down $3.3 billion from June but still 1.1% larger than that of a year earlier. Growing during the month were exports of automobiles (+$0.6 billion) and non-monetary gold (+$0.3 billion) while the biggest slowdowns in imports dealt with pharmaceutical preparations (-$1.5 billion) and cell phones/household goods (-$1.3 billion). Global trade activity remained slower than that from last year. The trade deficit over the first 7 months of the year was 3.6% greater than the deficit of the same 7 months in 2014, with both exports (-3.5%) and imports (-2.2%) below year ago levels.

Purchasing managers reported slower business growth during August. The Purchasing Managers’ Index from the Institute for Supply Management declined for a 2nd straight month with a 1.6 point drop to 51.1. The measure of manufacturing activity has been in expansionary territory (i.e., above a reading of 50.0) for 32 straight months. 4 of 5 index components declined during the month (production, new orders, inventories and employment), while the supplier deliveries index improved. Only 10 of 18 tracked manufacturing industries expanded during the month. The press release noted that there was a “continuing concern over export growth.”

The ISM report for the service sector also indicated slowing growth, but the overall picture was brighter than that for manufacturing. The headline index from the Report on Business—Nonmanufacturing lost 1.3 points from the post-recession high it had hit in July as it fell to 59.0. This was the index’s 67th straight month above a reading of 50.0. All 4 index components declined from July: business activity (-1.0 point to 63.9), new orders (-4/10ths of a point to 63.4), employment (-3.6 points to 56.0) and supplier deliveries (off a half point to 52.5). 15 of 18 tracked service sector industries expanded during the month. The press release noted that survey respondents were “optimistic about business conditions and the economy”

Factory orders grew for a 2nd straight month in July, but activity remained soft. The Census Bureau estimates new orders for manufactured goods grew 0.4% during July to a seasonally adjusted $482.0 billion. Leading the charge was the 5.5% gain in new orders for transportation goods, itself boosted by a 4.0% jump in automobile orders and a 19.5% surge in orders for boats and ships (orders for both civilian and defense aircraft fell during the month). Durable goods orders gained 2.2% during the month while that for nondurables contracted 1.3%. Compared to a year earlier, factory orders were down 14.7% (although the comparable is not completely informative as July 2014 featured a particularly large gain in civilian aircraft orders). Meanwhile, the value of shipments fell for the 3rd time in 4 months (-0.2%), unfilled orders grew for a 2nd straight month (+0.2%) and inventories contracted for a 3rd consecutive month (-0.1%).

Housing and business spending boosted construction activity during July. The Census Bureau reports the seasonally adjusted value of construction put into place grew 0.7% during the month to $1.083 trillion (+13.7% vs. July 2014). Private sector spending jumped 1.3% to $787.8 billion (+16.9% from a year earlier), with residential spending growing 1.1% during the month and nonresidential spending picking up 1.5%. The 12-month comparables for the two were +15.6% and +18.2%, respectively. Public sector spending chilled 1.0% during July, but remained 6.1% above year ago levels.