Employers continued to have difficulty filling job openings in August. Here are the five things we learned from U.S. economic data released during the week ending October 19. 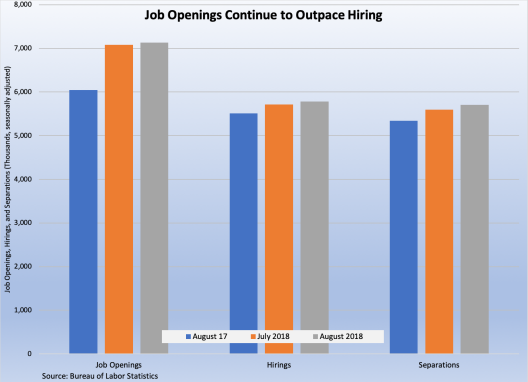 September was a weak month for retail sales. The Census Bureau estimates U.S. retail and food services sales inched up 0.1 percent during the month to a seasonally adjusted $509.0 billion. Even with the modest increase during September, sales have grown 4.7 percent over the past year. Sales at auto dealers/parts stores jumped 0.8 percent while gas station sales slowed 0.8 percent. Net of both, core retail sales were unchanged during September but have expanded 5.0 percent over the past 12 months. Sales improved during the month at retailers focused on furniture (+1.1 percent), electronics/appliances (+0.9 percent), sporting goods/hobbies (+0.7 percent), apparel (+0.5 percent), and building materials (+0.1 percent). Sales slumped, however, at restaurants/bars (-1.8 percent), department stores (-0.8 percent), and grocery stores (-0.1 percent).

Existing home sales sputtered again in September. The National Association of Realtors reports that sales of previously owned homes fell 3.4 percent during the month to a seasonally adjusted annualized rate of 5.15 million homes. This was not only a 4.1 percent drop from the same month a year earlier, it also was the measure’s seventh consecutive decline and the slowest pace of existing home sales in nearly three years. Sales failed to increase in all four Census regions, although transaction volume managed to hold even with August levels in the Midwest. All four Census regions had negative 12-month comparables: West (-12.2 percent), Northeast (-5.6 percent), Midwest (-1.5 percent), and the South (0.5 percent). A part of the problem remained a lack of homes on the market—there were 1.88 million homes available for sale at the end of September, down 1.6 percent from August but up 1.1 percent from a year earlier. This was the equivalent to a paltry 4.4 month supply of homes. The resulting median sales price has risen 4.2 percent over the past year to $258,100. NAR’s press release also ties recent sales weakness to “a decade’s high mortgage rates” that it says were “preventing consumers from making quick decisions on home purchases.”

The U.S. budget deficit surged 17.0 percent during the just-completed fiscal year. The U.S. Treasury Department reports that the federal government collected $3.329 trillion in receipts during the just completed FY2018, up 0.4 percent from FY2018. Outlays, however, jumped 3.2 percent during the same 12 months to $4.108 trillion. The resulting budget deficit of -$778.996 billion represented a 17.0 percent jump from FY2017. A closer look at receipts finds individual tax collections surged 6.1 percent during FY2018 while corporate tax receipts plummeted 31.1 percent. The U.S. government had accumulated a total debt of $21.460 trillion by September 30, 2018.