The unemployment rate dropped to a multi-decade low while the trade deficit widened to a six-month high. Here are the five things we learned from U.S. economic data released during the week ending October 5.

The unemployment rate fell to a 49-year low during September. The Bureau of Labor Statistics reports that nonfarm payrolls grew by a seasonally adjusted 134,000 during the month, below the 165,000 and 270,000 jobs created during July and August. Some of the slowdown in job creation can be linked to the effects of Hurricane Florence, which weighed on the retail (-20,000 jobs) and leisure/hospitality (-17,000) sectors. Private sector employers added 121,000 jobs during September, less than half of the 254,000 private sector jobs added in August. Industries adding the most workers during September were professional/business services (+54,000), health care/social assistance (+29,800), transportation/warehousing (+23,800), and construction (+18,000). The average number of hours worked remained at 34.5 hours (September 2017: 34.3 hours) while average weekly earnings increased by $2.76 to $939.78 (+3.4 percent versus September 2017).

Based on a separate survey of households, the unemployment rate dropped to its lowest reading since December 1969 at 3.7 percent. This was down 2/10ths of a percentage point from August and a half percentage point from the same month a year earlier. 150,000 people entered the labor force during the month, but the labor force participation rate remained at 62.7 percent (September 2017: 63.0). The labor force participation rate for adults aged 25 to 54 shed 2/10ths of a percentage point to 81.8 percent, matching its year-ago reading. The median length of unemployment was 9.2 weeks, off 9/10ths of a week from September 2017 while the number of part-time workers seeking a full-time position has fallen 9.8 percent over the past year to 4.642 million people. Finally, the broadest measure of labor underutilization (the U-6 series) came in at 7.5 percent, just above its post-recession low (September 2017: 8.3 percent). 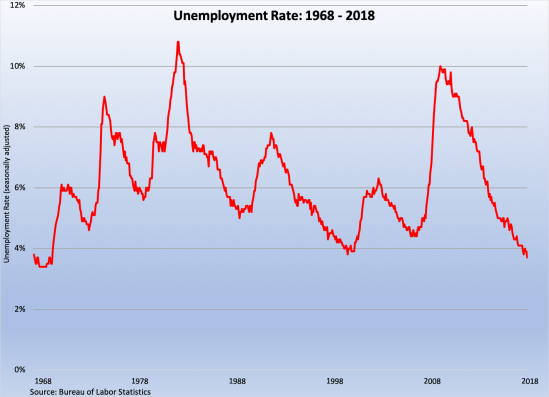 The trade deficit grew to a six-month high in August. Export activity slowed $1.7 billion during the month to a seasonally adjusted $209.4 billion (+7.1 percent versus August 2017) while imports grew by $1.5 billion to $262.7 billion (+9.6 percent versus August 2017), per the Census Bureau and the Bureau of Economic Analysis. The resulting trade deficit of -$52.2 billion represented a $3.2 billion increase for the month, a 20.5 percent jump from the same month a year earlier, and the largest trade deficit since February. The goods deficit blossomed by $3.6 billion to -$76.7 billion (+17.2 percent versus 2017) while the service surplus widened by $0.4 billion to +$23.5 billion (+10.2 percent versus August 2017). The former was hurt by declining exports of crude oil/petroleum products and soybeans and increased imports of automotive vehicles and cell phones. The U.S. had its largest goods deficits with China (-$34.4 billion), the European Union (-$14.9 billion), and Mexico (-$8.7 billion).

Aircraft orders fueled factory orders in August, but core capital orders struggled. The Census Bureau reports that new orders for manufactured goods jumped 2.3 percent during the month after falling 0.5 percent in July. The seasonally adjusted $510.5 billion estimate for new orders represented a robust 10.0 percent increase over the past year. As noted with the previous week’s durable goods report, much of the rise was the product of the 69.0 percent surge in civilian aircraft orders and the 17.0 percent bounce in orders for defense aircraft. Net of transportation goods, factory orders managed a mere 0.1 percent increase. Durable goods orders rose 4.4 percent to $259.6 billion while orders for nondurables gained 0.2 percent to $250.9 billion. Civilian capital goods orders net of aircraft—a proxy of business investment—slumped 0.9 percent. Shipments grew 0.5 percent during the month to $504.0 billion (+7.8 percent versus August 2017), with the gain shrinking to a 0.2 percent increase after removing transportation goods. Shipments of core capital goods contracted 0.2 percent during August.

Purchasing managers report business activity largely held firm in September. The PMI, the headline index from the Institute for Supply Management’s Manufacturing Report on Business, slid by 1.5 points to a reading of 59.8. Even with the decline, this was the 25th consecutive month in which the measure was above a reading of 50.0, indicative of an expanding manufacturing sector. Only two of the five PMI components improved during the month:  production (+0.6) and employment (+0.3). Dropping were PMI components linked to supplier deliveries (-3.4), new orders (-3.3), and inventories (-2.1). Fifteen of 18 manufacturing industries expanded during September, led by textile mills, “miscellaneous” manufacturing, and plastics/rubber products. The press release noted that survey respondents remained “overwhelmingly concerned about tariff-related activity.”

The NMI, the headline index from the Nonmanufacturing Report on Business, jumped by 3.1 points to a reading of 61.6. This was the measure’s 104th straight month with a reading above 50.0. All four NMI components jumped during the month: employment (+5.7), business activity/production (+4.5), new orders (+1.2), and supplier deliveries (+1.0). Seventeen of 18 tracked nonmanufacturing industries grew during September, led by mining, real estate, and wholesale trade. The press release noted the survey respondents were “positive” about current market conditions but were concerned about “capacity, logistics and the uncertainty with global trade.”