Existing home sales stalled while housing starts picked up. Here are the five things we learned from U.S. economic data released during the week ending September 21.

Sales of previously owned homes held constant in August. The National Association of Realtors places the seasonally adjusted annualized sales rate of existing homes at 5.34 million units, matching July’s sales pace and off 1.5 percent from a year earlier. Sales improved during the month in the Northeast (+7.6 percent) and Midwest (+2.4 percent) but slipped in the West (-5.9 percent) and South (-0.4 percent). Only in the South were existing home sales ahead of their year-ago pace. Also unchanged for the month was the inventory of unsold homes—the 1.92 million homes available for sale at the end of August was 2.7 percent larger than that of a year earlier but also represented a very tight 4.3 month supply. The resulting median sales price of homes sold has grown 4.6 percent over the past 12 months to $264,800. The press release was optimistic: “With inventory stabilizing and modestly rising, buyers appear ready to step back into the market.” 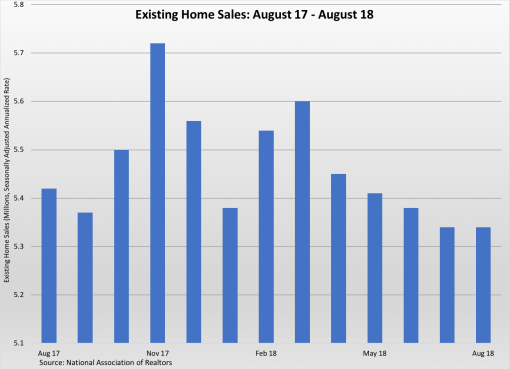 Housing starts rebounded in August. The Census Bureau reports that housing starts rose 9.2 percent during the month to a seasonally adjusted annualized rate (SAAR) of 1.282 million units. This was 9.4 percent ahead of the August 2017 annualized rate of housing starts. Much of the gain was with multifamily units—starts of buildings with five or more units surged 27.3 percent to 392,000 (SAAR) while single-family unit starts gained a more modest 1.9 percent to 876,000 (SAAR). Looking towards the future, the number of issued construction permits slumped 5.7 percent to an annualized 1.303 million (-5.5 percent versus August 2017). The rate of issued permits fell during the month for single-family (-6.1 percent) and multi-family units (-8.0 percent). Housing completions increased 2.5 percent during August to a SAAR of 1.213 million homes. This represented an 11.2 percent improvement from the August 2017 rate of completions.

Homebuilder sentiment remained robust in September. The National Association of Home Builder’s Housing Market Index (HMI) stayed at a seasonally adjusted reading of 67 during the month. This was the 52nd straight month in which the HMI was above a reading of 50, meaning a greater percentage of homebuilders saw the housing market as being “good” as opposed to being “poor.” The HMI improved in the Northeast (61), slipped in the South (69) and Midwest (56), and held steady in the West (73). Gaining during the month were measures for current sales (up a point to 74) and expected sales (up two points to 74) of single-family homes while the measure of traffic of prospective buyers held steady of 49. The press release reported “firm demand for housing” but expressed concerned about both the trade tariffs’ impact on builders’ costs and rising interest rates possibly stemming housing demand.

Forward-looking economic indicators continued to point towards more growth this year and into 2019. The Conference Board’s Leading Economic Indicators (LEI) added 4/10ths of a point to 111.2 (2016=100), up 6.4 percent from a year earlier. This was slightly smaller than the 6/10ths and 8/10ths of a point increases during the two prior months. Seven of the ten components that make up the LEI made positive contributions. The coincident index gained by 2/10ths of a point to 104.3 (+2.5 percent versus August 2017). All four components of the coincident index made positive contributions. The lagging index also increased by 2/10ths of a point to 105.4 (+2.3 percent versus August 2017), although only two of seven index components improved during August. While noting that the “strengths among the LEI’s components were very widespread,” the press release pointed out that its “growth trend has moderated since the start of the year.”

August’s job gains were centered mainly in just four states. The Bureau of Labor Statistics deeper state-level dive at employment trends for August finds that nonfarm payrolls had statistically meaningful increases in just four states: California, Texas, Arizona, and Florida. Payrolls were “essentially unchanged” in the other 46 states and the District of Columbia. Earlier this month, we had learned that nonfarm payrolls expanded by a seasonally adjusted 201,000 during August. Over the past year, employment had grown in 35 states with the biggest percentage gains in Utah (+3.5 percent), Nevada (+3.3 percent), and Washington state (+3.3 percent).