The labor market continued to chug along this spring. Here are the five things we learned from U.S. economic data released during the week ending June 1.

Job creation accelerated while the unemployment rate fell to another post-recession low in May. The Bureau of Labor Statistics reports that nonfarm payrolls expanded by a seasonally adjusted 223,000 jobs during the month, its largest single-month increase in three months and its 92 consecutive monthly gain. Public sector employers added 218,000 workers to their payrolls during the month while public sector payrolls expanded by 5,000. Industries adding the most jobs during May were health care/social assistance (+31,700), retail (+31,100), construction (+25,000), leisure/hospitality (+21,000), transportation/warehousing (+18,700), and manufacturing (+18,000). The average workweek held steady at 34.5 hours (May 2017: 34.4 hours) while the average for weekly earnings of $928.74 represented a 3.0 percent increase from that of a year earlier. 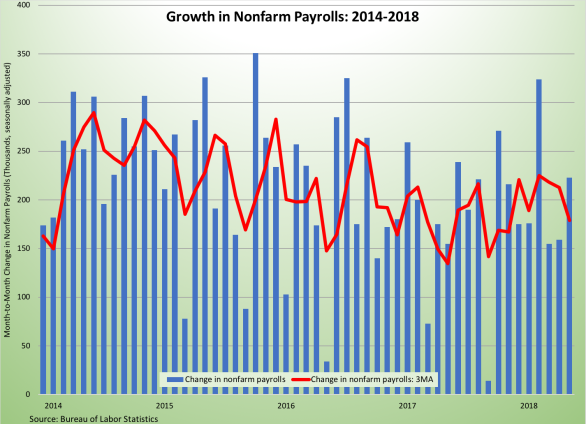 GDP growth slightly less robust during Q1 than previously thought. The Bureau of Economic Analysis estimates the Gross Domestic Product (GDP) for the first three months of 2018 was at $19.957 trillion on a seasonally adjusted annualized rate (SAAR). After adjusted for inflation, real GDP grew 2.2 percent (SAAR) during Q1, just below the 2.3 percent increase reported a month earlier and under the 2.9 percent growth rate achieved during the final three months of 2017. The biggest positive contributors to Q1 GDP growth were (in descending order) nonresidential fixed investment (adding 105-basis points to GDP growth), personal spending (+71-basis points), government expenditures (+20-basis points), change in private inventories (+13-basis points), and net exports (+8-basis points). Residential fixed investment cost eight-basis point of GDP growth during the quarter. Corporate profits slipped 0.6 percent during Q1 but were 4.3 percent ahead of that from Q1 2017. The BEA will revise its Q1 GDP estimate again later this month.

Personal spending rose for a second straight month in April. Real personal consumption expenditures (PCE) grew 0.4 percent on a seasonally adjusted basis following a 0.5 percent bump in March. The Bureau of Economic Analysis reports that spending on goods and services each gained 0.4 percent, with the increases for the former split by +0.3 percent and +0.4 percent for durable and nondurable goods, respectively. The increase in spending outpaced the 0.2 percent gain in real disposable income. Funding the difference was a contraction in the savings rate (down 2/10ths of a percentage point +2.8 percent). Over the past year, real PCE has grown 2.7 percent while real disposable income has expanded 1.9 percent. The same report finds inflation—as measured by the PCE deflator—growing 0.2 percent during April and rising 2.0 percent over the past year. The same comparbles for the core deflator (which removes both energy and food) were +0.2 percent and +1.8 percent, respectively.

Purchasing and supply executives report manufacturing activity accelerated in May. The Institute for Supply Management’s Purchasing Managers Index (PMI) added 1.4 points during the month to a seasonally adjusted reading of 58.7. This was the 21st straight month in which the PMI was above a reading of 50.0, indicating an expanding manufacturing sector. Four of five components of the index improved from their April readings: production (up 4.3 points to 61.5), new orders (up 2.5 points to 61.2), employment (up 2.1 points to 56.3), and supplier deliveries (up 9/10ths of a point to 62.0). The inventories index lost 2.7 points to 50.2. Sixteen of 18 tracked manufacturing sectors expanded during the month, led by textiles, nonmetallic mineral productions, and electrical equipment. The press release noted that survey respondents indicated that demand was “robust” but that tightness in both the labor market and supply chain are weighing on activity.