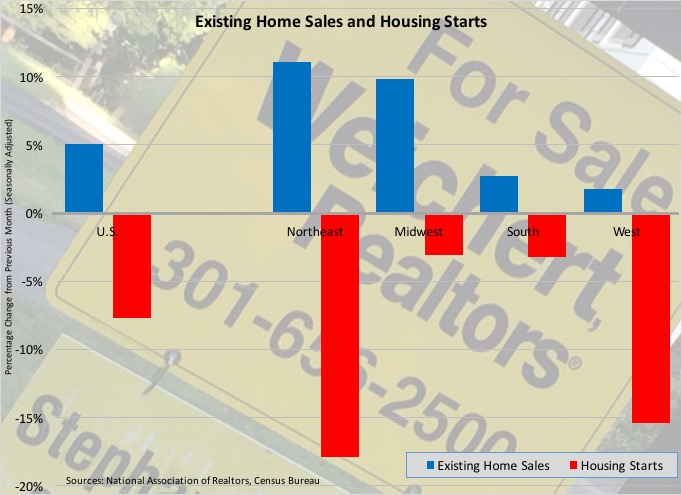 Economic activity remained slow in March, even though existing home sales bounced back. Here are the 5 things we learned from U.S. economic data released during the week ending April 22.

Existing home sales rebounded in March. The National Association of Realtors reports that sales of previously owned homes jumped 5.1% during the month to a seasonally adjusted annualized rate of 5.33 million units. This follows February’s 7.3% sales drop and leaves the sales pace 1.5% above that of a year earlier. Sales grew on a month-to-month basis in all 4 Census regions, led by the Northeast (+11.1%) and Midwest (+9.8%). 3 of 4 Census regions also had positive 12 month comparables: Northeast (+7.7%), South (+2.3%) and Midwest (+0.8%). Sales were 2.5% below their March 2015 levels in the West. There were 1.98 million previously owned homes on the market at the end of March, up 5.9% from February yet still 1.5% below

March 2015 levels. This translated into a tight 4.5 month supply. The median sales price of $222,700 was up 5.7% from a year earlier. The press release noted that “buyer demand remains sturdy in most areas this spring.”

Yet, housing starts dropped in 3 of 4 Census regions in March. The Census Bureau estimates starts of new home construction declined 8.8% during the month to a seasonally adjusted annualized rate of 1.089 million units, which was still 14.2% above year ago levels. (This is where we point out that while NAR’s existing home sales data series measures closed transactions of previously owned homes, the Census Bureau’s new home sales measures only contract signings for new homes.) Sales dropped 25.4% in the Midwest, 15.7% in the West and 8.4% in the South, while they rose 61.3% in the Northeast. The month-to-month declines were split between a 9.2% drop for single-family units (to 764,000) and a 7.9% decline in multi-family units (to 325,000). Looking towards the future, the SAAR of issued construction permits dropped 7.7% during March to 1.086 million units. Permits for single-family homes slipped 1.2% to 727,000 (SAAR) while those for multi-family units slumped 18.6% to 359,000. The annualized count of completed homes improved 3.5% to 1.061 million units, 31.6% above the year ago pace.

Despite the drop in starts, homebuilders’ confidence remained solid. The Housing Market Index from the National Association of Home Builders maintained a seasonally adjusted reading of 58 for a 3rd straight month in April. The index has remained above a reading of 50—which means more builders view the housing market as “good” rather than “poor”—for 22 consecutive months. The index held steady in both the West (67) and South (59), but softened in the Midwest (56) and Northeast (41). The single-family sales index lost 2 points to a reading of 63 while the index for expected sales over the next 6 months added a point to 62. Also gaining a point was the index for traffic of potential buyers (44). The press release noted that “builders remain cautiously optimistic about construction growth in 2016.”

U.S. economic growth was below normal again in March. The Chicago Fed National Activity Index shed 6-basis points during the month to a reading of -0.44. This was the 9th month over the past 11 in which the index of 85 economic indicators calculated by the Federal Reserve Bank of Chicago came in negative. Among the 4 major categories of index components, the biggest drag on the CFNAI remained those associated with production/income (with a reading of -0.31). Measures associated with consumption/housing (-0.09) and employment (-0.04) also pulled down the CFNAI, while index components associated with sales/orders/inventories had a neutral impact. The 3-month moving average for the CFNAI lost 7-basis points to -0.18. This was the 7th straight month in which the moving average was negative, indicative of below average economic growth. In fact, the moving average has not been positive since January 2015 (the moving average was at 0.00 last August).

Forward looking economic indicators improved for the 1st time in 4 months in March. The Conference Board’s Leading Economic Index added 3/10ths of a point to 123.4 (2010 = 100). 6 of 10 of the leading index’s components improved during the month, led by stock prices and the interest rate spread. The coincident index held steady with a reading of 113.3 even as 3 of 4 components made a positive contribution to the index (the one laggard was industrial production). The lagging index gained a half point to 120.9 as 4 of 7 index components made positive contributions. The press release said the leading index “still points to slow, although not slowing, growth in the coming months.”