Even with weak Q3 GDP growth, is the Fed about to make its move? Here are the 5 things we learned from U.S. economic data released during the week ending October 30.

Once again, the FOMC did not act…but it continued to set the stage for a move. The policy statement released following last week’s meeting of the Federal Open Market Committee once again said the U.S. economy was “expanding at a moderate pace.” Household spending and business investment were both “increasing at solid rates” and the housing market was expanding. But, exports were described as being “soft” and the rate of job creation had “slowed.” In the case of the latter, the statement stressed that the labor market was stronger now than it was earlier in the year.  The Committee voted to keep the fed funds target rate at near zero percent, although voting member Jeffery Lacker wanted the FOMC to bump the target rate up by 25-basis points now. Noteworthy is what was missing from the statement: the previously included statement that global economic conditions were downward risks to the U.S. economy. Some interpret this as a sign that the Fed will raise short-term interest rates at its final 2015 meeting, scheduled for mid-December.

The pace of economic expansion was lethargic during Q3. It was no surprise that the estimate of Q3 Gross Domestic Product (GDP) from the Bureau of Economic Analysis would be weak. In fact, the 1.5% seasonally adjusted annualized growth rate was pretty much on target with consensus forecasts. But it did complete a 4 quarter period of uneven economic growth, with the 3 previous quarters’ growth rates being +2.1%, +0.6% and +3.9%.  Economic growth during Q3 was driven by gains in personal consumption (which grew 3.2% SAAR), state/local government spending (+2.6% SAAR), nonresidential fixed 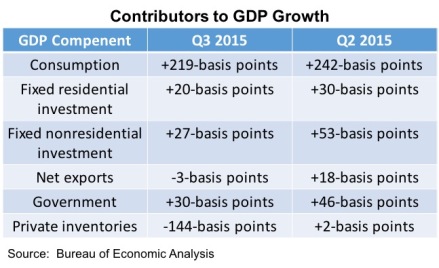 investment (+2.1% SAAR) and residential fixed investment (+6.1% SAAR). The biggest drag on GDP during the quarter was a slower pace of private inventory accumulation, which knocked 144-basis points from GDP growth. Inflation was muted during the quarter—the personal consumption expenditure (PCE) deflator grew by only 1.2% (SAAR) during Q3, with the core PCE deflator (net of both energy and food) increasing by only 1.3%. The BEA will revise its Q3 GDP estimate twice over the next 2 months.

Personal spending grew at a slow pace in September. The Bureau of Economic Analysis reports that real personal consumption expenditures (PCE) increased 0.2% during the month following a 0.4% gain during August. Real spending on goods was flat during the month despite a 0.6% jump in spending for durable goods (spending on motor vehicles surged 1.5%). Real spending on nondurable goods fell 0.3% while spending on services gained 0.3%. Over the past year, real consumer spending has increased 3.2%, with gains of 3.9% and 2.9% for goods and services, respectively. Without inflation adjustments, nominal consumer spending grew 0.1% during the month. The spending was funded by a seasonally adjusted annualized rate (SAAR) of personal income of $15.391 trillion, up 0.1% from August and 4.1% from a year earlier. The savings rate inched up 1/10th of a percentage point to +4.8%.

New home sales plummeted in September. In contrast to the higher sales of previously owned homes as reported here last week, sales of new homes fell 11.5% during the month to a seasonally adjusted annualized sales rate of 468,000 units. The Census Bureau measure remained 2.0% above the year ago pace, with positive 12-month comparables in both the West (+8.6%) and South (+8.3%). Inventories of unsold homes grew 4.2% during the month but remained relatively tight: the 225,000 unsold new homes at the end of September represented a 5.8 month supply. The median sales price of new homes was 13.5% above year ago levels at $296,900 (note that price comparables for new homes can be tricky as the measure is not controlled for home size, quality, etc.).

The 2 measures of consumer confidence gave mixed stories for September. The Conference Board’s Consumer Confidence Index shed 5.0 points in October to a seasonally adjusted 97.6 (1985 = 100), its lowest reading since July. The present conditions index dropped 8.2 points to 112.1 while the expectations index pulled back by 2.8 points to 88.0. The press release noted that consumers were less optimistic about the job market and the short-term outlook, but noted that survey respondents “still rate current conditions favorably, but they do not anticipate the economy strengthening much in the near-term.”

Meanwhile, the University of Michigan Index of Consumer Sentiment increased by 2.8 points during the month to a seasonally adjusted reading of 90.0 (1966 Q1 = 100).  This reading, while above the year ago mark of 86.9, is actually a downward revision from the preliminary October reading of 92.1 reported a few weeks earlier. The current conditions index added 1.2 points to 82.1 while the expectations index gained 3.9 points to 82.1. The press release noted that lower income survey respondents had grown more confident during the month while higher income households’ sentiment “retreated a bit due to concerns about financial markets. The release also pointed out that views on future financial prospects had not been this strong since 2007.