There was another tepid estimate of Q2 GDP. Consumer spending slowed in August, but consumer sentiment jumped in September. Here are the 5 things we learned from U.S. economic data released during the week ending September 30.

The 3rd and final (for now) estimate of Q2 GDP still shows modest economic growth. The Bureau of Economic Analysis now says Gross Domestic Product (GDP) expanded during the months of April, May, and June at a seasonally adjusted annualized rate of +1.4%. This was up from previously reported Q2 growth rate estimates of +1.2% and +1.1% reported in prior months. The revision was the product of higher than previously believed levels of fixed nonresidential investment, inventory accumulation, and exports. As we saw with previous Q2 GDP reports, only consumption and net exports made positive contributions to economic growth during the quarter. Weighing on GDP were fixed investment (both residential and nonresidential), private inventory accumulation, and government expenditures. Meanwhile, corporate profits from current production slipped 0.6% during the quarter to a SAAR of $2.021 trillion, 4.3% below its Q2 2015 level.

Consumer spending eased during August. The Bureau of Economic Analysis finds “real” personal consumption expenditures (PCE) slipped 0.1% on a seasonally adjusted basis during the month. Even with the drop, real consumer spending was up 2.6% from a year earlier. Falling was real spending in goods—the 0.6% decline was split between decreases of 1.3% and 0.3% for durable and nondurable goods, respectively. Spending on services edged up 0.1%. (The “real” spending figures are based on 2009 chained dollars. In nominal (not adjusted for inflation) terms, spending was unchanged during the month.) Personal income and disposable income both increased 0.2% during the month, with “real” disposable income growing 0.1% during September that places it 2.4% above year ago levels. The savings rate edged up 1/10th of a percentage point to +5.7%. The report’s price index (the PCE deflator) inched up 0.1% during August, with the “core” PCE deflator (net of energy and food) growing 0.2%. The 12-month comparables for the deflators remained below the Fed Reserve’s 2% inflation target at +1.0% and +1.7%, respectively.

Two measures of consumer sentiment improved during September. The Conference Board’s Consumer Confidence Index added 2.3 points during the month to a seasonally adjusted reading of 104.1 (1985=100), a post-recession high. The current conditions index increased by 3.2 points to 128.6 while the expectations index gained 1.7 points to 87.8. While the percentage of survey respondents viewing current business conditions as “good” actually declined by 2.9 points to 27.4%, the percentage saying conditions were “bad” also fell by losing 2.0 points to 16.2%. 27.9% of respondents agree that jobs were “plentiful” while 21.6% believe that they were “hard to get.” The press release stated that “consumers continue to rate current conditions favorably and foresee moderate economic expansion in the months ahead.”

Meanwhile, the University of Michigan’s Index of Consumer Sentiment added 1.4 points during September to a seasonally adjusted reading of 91.4 (1966Q1=100). While the current conditions index shed 2.8 points to a reading of 104.2, the expectations measure gained 4.0 points to 82.7. Only 10% of survey respondents anticipate their financial situation will “worsen” over the next year with the typical respondent expecting an income gain of 1.7% over the next 12 months. The press release notes that a combination of a “strength in personal finances” and low interest rates will lead to real consumption growing at a 2.7% rate through mid-2017. 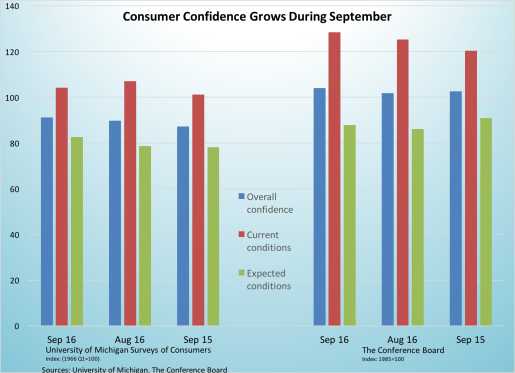 Sales of new homes dropped in August, but remained near post-recession highs. The Census Bureau reports that new home sales dropped 7.6% during the month to a seasonally adjusted annualized rate of 609,000 units. Even with the drop, this was 20.6% above the August 2015 sales pace. Sales dropped in 3 of 4 Census regions during the month (an 8.0% gain in the West being the exception) while 3 of 4 regions enjoyed double-digit percentage gains from a year earlier (the Northeast was the exception with a 25.8% drop). Inventories of unsold new homes remained very tight but managed to grow 1.7% during the month to 235,000 units. This was up 8.3% from the August 2015 inventory and represented a 4.6 month supply.

Contract signing activity to purchase previously owned homes also declined during August. The Pending Home Sales Index from the National Association of Realtors lost 2.7 points during the month to a seasonally adjusted reading of 108.5 (2001=100). The index, which measures the number of signed contracts to purchase a previously owned home, improved in the Northeast (adding 1.3 points to 98.1), but fell in the other 3 Census regions: West (down 5.7 points to 102.8), South (down 3.9 points to 119.8), and Midwest (down 9/10ths of a point to 104.7). Similarly, only the Northeast enjoyed a positive 12-month comparable. NAR’s press release said that tight inventories of unsold homes “have taken the wind out of the momentum” out of the housing market.