Industrial production and retail sales both shifted into lower gear as the weather heated up in August. Here are the 5 things we learned from U.S. economic data released during the week ending September 16.

Manufacturing output slowed in August. According to the Federal Reserve’s Industrial Production report, manufacturing output dropped 0.4% during the month and was 0.4% below year ago levels. Durable goods production fell 0.6%, while nondurables output slowed 0.2%. The declines in durable goods production were widespread, with output drops greater than 1.5% suffered for machinery (-1.9%), wood products (-1.6%), and electrical equipment (-1.6%). On the other hand, motor vehicle output gained 1.0% during August. A 2.1% drop in textiles production weighed on nondurable production. Overall industrial production slumped 0.4% in August and was 1.1% below that of August 2015. Mining output bounced up 1.0% during the month (reflecting increased oil and gas extraction) while production at utilities dropped 1.4%. There was a bit more downtime for factories during August—capacity utilization shed 4/10ths of a point to 75.5%. Manufacturing sector utilization also decreased by 4/10ths of a point to 76.2%.

Retail sales wilted in the heat of August. The Census Bureau estimates retail and food services sales declined 0.3% during the month to a seasonally adjusted $456.3 billion. This was 1.9% above year ago levels. Focusing on just retailers, sales dropped 0.5% during the month and were up a mere 1.4% from August 2015 levels. Suffering from sales declines were sporting goods/hobby stores (-1.4%), building material retailers (-1.4%), auto dealers (-1.0%), gas stations (-0.8%), furniture stores (-0.7%), and department stores (-0.6%). Retail sectors enjoying higher sales during the month were restaurants/bars (0.9%), apparel retailers (+0.7%), grocery stores (+0.4%), and electronic/appliance retailers (+0.1%). Sales at nonstore retailers (e.g., internet retailers) suffered a rare monthly decline with a 0.3% drop, which nevertheless remained 10.9% above their year ago sales pace. 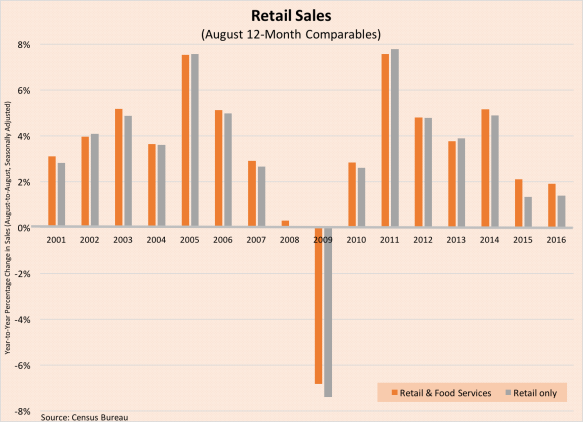 Consumer prices ticked up, while wholesale prices stayed closer to recent trends. The Bureau of Labor Statistics reports the seasonally adjusted Consumer Price Index (CPI) increased 0.2% during August and were 1.1% above year ago levels. CPI for energy goods was unchanged during the month, as lower prices fuel oil (-2.5%) and gasoline (-0.9%), were counterbalanced by higher prices for utility delivered natural gas (+2.1%) and electricity (+0.5%). Food CPI held steady for the month. Net of both energy and food, core CPI grew 0.3% and was 2.3% above year ago levels (both at their highest point since February). The largest price gains during the month were with medical care commodities (+1.1%) and medical care services (+0.9%), with increases also seen for shelter (+0.3%), apparel (+0.2%), and transportation services (+0.1%). While prices for new vehicles were unchanged, they fell 0.6% for used cars and trucks.

Meanwhile, the final demand Producer Price Index (PPI) was unchanged for both the month and over the past 12 months. Net of energy (-0.8%) and food (-1.6%), core final demand PPI gained 0.3%, matching both January and June as its highest marks of the year. Nevertheless, core PPI was only 1.2% above year ago levels. A drop in wholesale food prices pulled down PPI for final demand goods 0.4% for the month. Net of energy and food, core final demand goods PPI edged up 0.1%. On the services side, PPI increased 0.1% for the month, even as price measures for trade (-0.6%) and transportation/warehousing (-0.4%) each declined. Earlier in the production cycle, wholesale prices continued to soften. Intermediate demand PPI for processed and unprocessed goods fell 0.1% and 2.8%, respectively, for the month with 12 month comparables at -3.1% and -8.4%, respectively.

Employers, on net, plan to further expand payrolls during Q4. According to the Manpower Employment Outlook Survey, 22% of employers intend to increase staff levels during the final 3 months of 2016 while 6% plan to decrease staff levels.  The difference of +16% turns into +18% after seasonal adjustments. This was a 3-point gain from the Q3 forecast and matches the value from Q4 2015, which was the measure’s post-recession high. The Net Employment Outlook was slightly higher in the West (+19) and South (+18) versus that in the Northeast (+16) and Midwest (+16). The index was positive in all 13 tracked industries, with the biggest readings seen for leisure/hospitality (+30), wholesale/retail trade (+22), transportation/utilities (+20), and professional/business services (+17). The press release indicated that employers were “optimistic, though hesitant, with their hiring intentions.”

But then there is a contrarian view from small business owners, who had a less optimistic economic outlook. The Small Business Optimism Index from the National Federation of Independent Business slipped by 2/10ths of a point in August to a seasonally adjusted 94.4 (1986=100). This continued the trend, in which the index has stayed within a tight 2-point range for all of 2016. 5 of 10 index components increased from their July readings: current opening (+4), plans to make capital outlays (+3), current inventories (+2), plans to increase inventories (+1), and whether it is a good time to expand (+1). Declining were index components for expected economic conditions (-7), hiring plans (-3), expected real sales (-2), earnings trends (-2). The press release blames “uncertainty” and “the political climate” for the pessimistic views of small business owners.