The July employment report was a bit of an antidote to the disappointing Q2 GDP data released a week earlier. Surveys of purchasing managers and data on construction spending did not provide additional relief. Here are the 5 things we learned from U.S. economic data released during the week ending August 5. 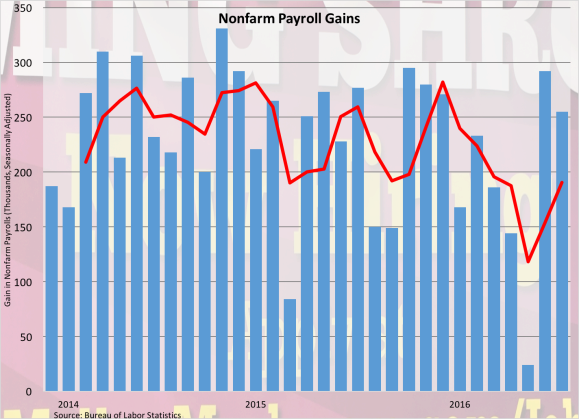 “Real” personal spending increased for a 3rd straight month. The Bureau of Economic Analysis places its estimate of real personal consumption expenditures (PCE) (based on 2009 chained dollars) at $11.514 trillion. This was up 0.3% for the month and 2.8% from a year earlier. Spending on goods and services also each grew at a 0.3% pace, with 12-month comparables for both at +3.6% and +2.4%, respectively. Durable goods spending gained 0.4% while that for nondurables increased 0.3%. Without adjustments for price variations, nominal consumer spending increased 0.4% during June.

The increased spending was funded, in part, by the 4th consecutive monthly rise in nominal personal income (+0.2% vs. May 2016, +2.7% vs. June 2015). Nominal and real disposable income grew 0.2% and 0.1%, respectively, during the month and expanded 3.1% and 2.2%, respectively, over the past 12 months. Also funding the growth in spending was a decline in savings. The savings rate of +5.3% was down 2/10ths of a percentage point from May and a half point from a year earlier. Finally, the same report shows still a moderate level of inflation. The PCE deflator grew 0.1% and was up only 0.9% over the past year. Removing both energy and food from the analysis finds the core PCE deflator up 0.1% for the month with the 12-month comparable below the Federal Reserve’s 2-percent target at 1.6%.

Two surveys of purchasing managers suggest slower business growth in July. The Purchasing Managers Index (PMI) shed 6/10ths of a point to a seasonally adjusted reading of 52.6, according to the Institute for Supply Management. This was the 5th straight month in which the PMI was above 50.0, which means the manufacturing sector grew during the month but the decline in the PMI suggests slower growth. 2 of 5 index components improved during the month (production and inventories) while the other 3 declined (supplier deliveries, employment, and new orders). 11 of 18 manufacturing sectors expanded during the month, led by textile mills and printing.

Meanwhile, the ISM’s measure for the service sector declined by a full point to a seasonally adjusted 55.5. The index has been above 50.0—indicating service sector expansion—for 78 straight months. 3 of 4 index components fell versus their June readings: supplier deliveries, employment, and business activity. Only the index component for new orders improved during the month. 15 of 18 nonmanufacturing industry expanded during the month; including, arts/entertainment, education services, and accommodation/food services. ISM’s press release noted that survey participants’ comments “reflect stability and continued growth for their respective companies and a positive outlook on the economy.”