The Federal Reserve hiked its short-term interest rate target for a fourth and final time in 2018. Here are the five things we learned from U.S. economic data released during the week ending December 21.

The Fed bumps up short-term rates but forecasts fewer hikes in 2019. The statement released following last week’s meeting of the Federal Open Market Committee once again noted that “the labor market has continued to strengthen and that economic activity has been rising at a solid rate.” Also, it indicated that core inflation was near its two-percent target rate, but also pointed out that business investment had “moderated.” Unlike with previous statements, this one included a comment that the committee “will continue to monitor global economic and financial developments and assess their implications for the economic outlook.” This is a reference to (among other things) the potential impact of tariffs, Brexit and partial government shutdowns. With all of this in mind, the committee voted unanimously to bump up the fed funds target rate by a quarter point to range between 2.25 and 2.50 percent. The hike was widely expected, despite some external cajoling to the contrary.

Released in conjunction with the policy statement was economic projections of Federal Reserve Board members and Federal Reserve Bank presidents and one big takeaway was an expectation for slightly slower economic growth than previously predicted. The median forecast now has gross domestic product (GDP) growing 2.3 percent in 2019, whereas the previous prediction had growth at 2.5 percent. The median projection for the unemployment rate next year remained at 3.5 percent, but the core inflation rate now is expected to be 2.1 percent in 2019 (versus the previous 2.0 percent forecast). Most notable is the median prediction among FOMC members now has two hikes in the fed funds target rate in 2019—previously, FOMC members had anticipated three hikes next year. 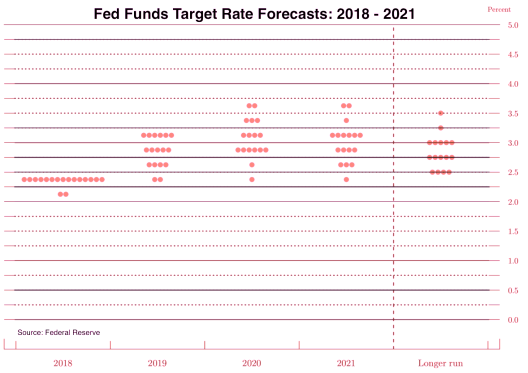 A revised Q3 GDP estimate continued to show robust economic growth. The Bureau of Economic Analysis’ third estimate of Q3 gross domestic product has the U.S. economy expanding at a healthy 3.4 percent seasonally adjusted annualized rate. This was just below the 3.5 percent rate of expansion reported in the first two previously published estimates. The downward revision was a product of lower than previously believed estimates of consumer spending and exports (only partially counterbalanced by an upward revision to private inventory accumulation). Corporate profits (with inventory valuation and capital consumption adjustments rose 3.5 percent to $2.321 trillion (+10.4 percent versus 2017 Q3).

Personal spending remained resilient in November. The Bureau of Economic Analysis estimates real (inflation-adjusted) personal consumption expenditures (PCE) increased 0.3 percent on a seasonally adjusted basis during the month. While this was half of October’s 0.6 percent bounce, it leaves real PCE up 2.8 percent over the past year. Real spending on goods rose 0.9 percent during November while services expenditures expanded at a more modest 0.2 percent. The 12-month comparables for both were a solid +3.4 percent and +2.8 percent, respectively. Funding the increased spending were 0.2 percent gains for nominal personal income and both real and nominal disposable income. Real disposable income has grown by 2.8 percent over the past year. The savings rate was +6.0 percent, down 1/10th of a percentage point from October.

Sales of previously owned homes grew for a second straight month after showing general weakness for much of 2018. The National Association of Realtors reports existing home sales increased 1.9 percent in November to a seasonally adjusted annualized rate of 5.32 million units. Despite the rise, home sales were 7.0 percent under its year-ago market, representing the largest negative 12-month comparable since November 2011. Sales grew during the month in three of four Census regions, with the West’s 6.3 percent decline being the outlier. All four Census regions experienced negative year-to-year sales trends: West (-15.4 percent), South (-5.6 percent), Midwest (-4.3 percent), and Northeast (-2.6 percent). Inventories contracted 5.9 percent during November to 1.74 million units (+4.2 percent versus November 2017 and the equivalent to a 3.9-month supply). The median sales price has risen 4.2 percent over the past year to $257,700.

Consumer sentiment ends the year on a high note. The University of Michigan’s Index of Consumer Sentiment added 8/10ths of a point in December to a seasonally adjusted 98.3. This places the sentiment measure 2.4 points ahead of its year-ago mark and keeps it within the same five-point range where it has been over the past two years. In December, the present conditions index added 3.8 points to 116.1 (December 2017: 113.8) while the expectations index shed 1.1 points to 87.0 (December 2017: 84.3). The press release notes that 2018 was the best year for the headline index’s 12-month average (98.4) since 2000.