The trade deficit widened and there were fewer job openings in October. On the other hand, new orders for factory orders grew in October while the service sector blossomed in November. Here are the 5 things we learned from U.S. economic data released during the week ending December 9.

A drop in exports leads to an expansion in the trade deficit during October. The Census Bureau and the Bureau of Economic Analysis data indicate that exports declined by $3.4 billion on a seasonally adjusted basis during the month while imports increased by $3.0 billion to $229.0 billion. The resulting trade deficit of -$42.6 billion was $6.4 billion larger than that from September and was at its widest point since June. The goods deficit widened by $6.3 billion to -$63.4 billion while the services surplus narrowed by $0.1 billion to +$20.8 billion. The decline in goods exports was the product of a $1.4 billion drop in exported food/feeds/beverages (including those for soybeans and corn), a $0.9 billion decrease in consumer goods exports, a $2.4 billion increase in consumer goods imports, and a $1.1 billion gain in imports of capital goods. The U.S. had its largest goods trade deficits during October with China (-$28.9 billion), the European Union (-$12.9 billion), Mexico (-$5.8 billion), Japan (-$5.8 billion), and Germany (-$4.7 billion).

The count of job openings and the number of people hired both declined in October. The Bureau of Labor Statistics estimates there were a seasonally adjusted 5.534 million job openings at the end of October. This was down 97,000 openings from the end of September but still up 2.1% from October 2015. The private sector had 5.022 million job openings at the end of October, 1.7% above year ago levels. Industries with the largest positive 12-month comparables included construction (+58.9%), retail (+20.2%), health care/social assistance (+17.7%), and financial activities (+13.0%). 5.099 million people were hired during October, off 22,000 from September and down 2.2% from the same month a year earlier. The same comparables for the private sector were -5,000 and -2.1%, respectively.

Factory orders jumped in October. The Census Bureau estimates new orders for manufactured goods jumped 2.7% during the month to a seasonally adjusted $469.4 billion. This was up 1.3% from a year earlier. Much—but not all—of the gain came in the form of new orders for aircraft. Civilian aircraft orders surged 93.8% while defense aircraft orders gained 32.5%. Those figures combined with a 0.7% decline in new orders for automobiles resulted in a 12.0% increase in transportation orders during October. Net of transportation goods, new orders for manufactured goods gained 0.8% during the month but were only 0.5% above October 2015 levels. Growing during the month were orders for fabricated metals (+1.8%), electrical equipment/appliances (+1.6%), and computer/electronic products (+0.8%). Orders for furniture fell 1.0% during October. Meanwhile, shipments of manufactured goods increased for the 7th time over the past 8 months with a 0.4% gain. Unfilled orders grew for the 1st time in 5 months with a 0.7% increase while inventories expanded for the 3rd time in 4 months, albeit with an increase that was smaller than 0.1%.

The service sector sharply strengthened during November. The headline index from the Institute for Supply Management’s Nonmanufacturing Report on Business added 2.4 points during November to a seasonally adjusted reading of 57.2. This was the highest reading for the measure of service sector activity since October 2015 and was the 82nd straight month in which it was above a reading of 50.0 (indicative of the nonmanufacturing side of the U.S. economy to be expanding). 3 of 4 index components improved during the month: employment (up 5.1 points to 58.2), business activity/production (up 4.0 points to 61.7), and supplier deliveries (up 1.5 points to 52.0). The new orders slipped 7/10ths of a point to 57.0. 14 of 18 tracked service sector industries grew during November, led by agriculture, retail, arts/entertainment/recreation, and transportation/warehousing. The press release noted that survey respondents expressed “positive” comments “about business conditions and the direction of the overall economy.”

The labor market created more jobs during November while the economy grew at a faster than previously believed pace during the summer. Here are the 5 things we learned from U.S. economic data released during the week ending December 2.

Employers continued to add workers during November. The Bureau of Labor Statistics estimates nonfarm payrolls expanded by a seasonally adjusted 178,000 during the month, following gains of 142,000, 208,000, and 280,000 during the 3 prior months. Private sector employers were responsible for 156,000 of the new jobs, split by 139,000 for the service sector and 17,000 for the goods-producing side of the economy. Industries with the largest payrolls gains during the month were professional/business services (63,000), health care/social assistance (+34,700), leisure/hospitality (+29,000), and construction (+19,000). Interestingly, the retail sector shed workers for a 2nd straight month with a drop of 8,300 during November. The average length of the workweek held steady during the month at 34.4 hours while average weekly earnings of $890.62 represented a 2.2% increase from a year earlier.

A separate survey of households finds the unemployment rate falling 3/10ths of a percentage point to 4.6%, its lowest post-recession reading. That news is tempered, however, by the fact that 226,000 people left the labor force during the month leading to a 1/10th of a percentage drop in the labor force participation rate to 62.7% (near its 4-decade low). The median length of unemployment fell to another post-recession low at 10.1 weeks (November 2015: 10.7 weeks). The seasonally adjusted count of involuntary part-time workers continued to decline, falling by 220,000 during the month to 5.669 million (November 2015: 6.085 million). Finally, the broadest measure of labor underutilization—the U-6 series—dropped to another low at 9.3% (November 2015: 9.9%). 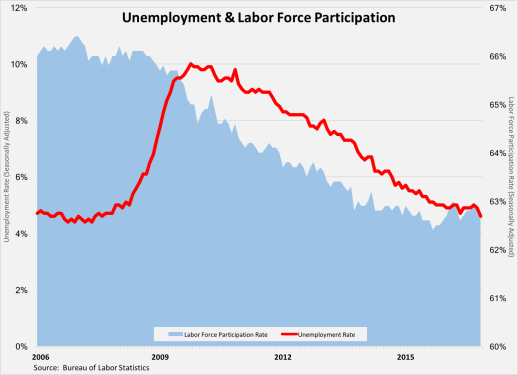 The U.S. economy grew at a slightly faster pace during Q3 than previously believed. The Bureau of Economic Analysis upwardly revised its estimate of 3rd quarter growth in the Gross Domestic Product (GDP) from a 2.9% gain to a 3.2% increase (both are seasonally adjusted annualized growth rates). The upward revision was the product of a higher than previously reported level of consumer spending. Even with the revision, the growth rate of personal consumption expenditures was below that of Q2 but nevertheless as responsible for 1.89 percentage points of GDP growth during Q3. Also adding to economic growth during the quarter were net exports (adding 87-basis points to GDP growth), an expansion in private inventories (49-basis points), and government spending (making a 5-basis point contribution to GDP growth). Fixed investment was a drag on GDP during the quarter, subtracting 15-basis points to the final GDP growth rate as a result of a slowdown in residential sector spending. The same report indicates that corporate profits (from current production) jumped 6.6% during the quarter to a SAAR of $2.155 trillion (+2.8% vs. Q3 2015). The BEA will revise its Q3 GDP report once again in a month.

Personal spending grew modestly in October. According to the Bureau of Economic Analysis, real personal consumption expenditures (PCE) inched up 0.1% on a seasonally adjusted basis during the month following a 0.5% jump in September. Real spending on goods increased 0.9% during the month, with gains of 1.0% and 0.8% for durable and nondurable goods, respectively. Real spending on services fell 0.3% during October. Real personal spending has grown 2.8% over the past year. On a nominal (current dollar) basis, spending grew 0.3% during October to a seasonally adjusted annualized rate of $12.925 trillion. Nominal personal income increased 0.6% during the month to a SAAR of $16.260 trillion, while disposable income grew on both a nominal (+0.6%) and real (+0.4%) basis. The savings rate grew by 3/10ths of a percentage point to +6.0%. Finally, the PCE deflator—a measure of price change—grew 0.2% during the month while the core index (net of energy and food) eked out a 0.1% gain. The 12-month comparables for both were +1.4% and +1.7%, respectively.

Purchasing managers reported faster manufacturing sector growth. The Purchasing Managers Index from the Institute for Supply Management grew by 1.3 points during November to a seasonally adjusted 53.2. This was the 3rd straight month in which the measure was above a reading of 50.0, indicative of a growing manufacturing sector. 4 of 5 PMI components improved during the month: supplier deliveries (up 3.5 to 55.7), inventories (up 1.5 to 49.0), production (up 1.4 to 56.0), and new orders (up 0.9 to 53.0). The component index tracking employment shed 6/10ths of a point to 52.3. 11 of 18 tracked manufacturing sectors expanded during November; including, petroleum/coal productions, paper products, computer/electronic products, and food/beverage products. The press release noted comments from survey respondents that had indicated “increasing demand, some tightness in the labor market and plans to reduce inventory by the end of the year.”

A closely watched measure of home prices finally topped pre-recession highs. The U.S. National Case-Shiller Home Price Index grew 0.4% (before seasonal adjustments) during September to a reading of 184.80. This was not only 5.5% above the year ago reading, it was 0.1% above its previous peak of 184.62 achieved by back in July 2006. Further, national home prices have risen 37.9% since their most recent trough of February 2012. The 20-City Case-Shiller Index remained 9.1% below its pre-recession high even though the index grew 0.1% before season adjustments.  On a seasonally adjusted basis, the 20-city index gained 0.4%, with prices rising in all tracked markets. The press release noted that the breakthrough in the national index “will be seen as marking a shift from the housing recovery to the hoped-for start of a new advance.”