Existing home sales edge up, new home sales slip down, and consumer sentiment improves following the election. Here are the 5 things we learned from U.S. economic data released during the week ending November 25.

Sales of existing homes hit a nearly 10-year high in October. The National Association of Realtors estimates sales of previously owned homes grew 2.0% during the month to a seasonally adjusted annualized sales rate (SAAR) of 5.60 million units. This was 5.9% above the year ago pace and the highest SAAR of home sales since February 2007. Sales grew versus both their September 2016 and October 2015 paces in all 4 Census regions. There were fewer homes on the market—at the end of October, there were 2.020 million homes available for sale, down 0.5% from September and 4.3% from a year earlier. The resulting 4.3 month supply resulted in a 4.4% year-to-year gain in the median sales price to $274,300. The press release links higher worker wages, improved economic activity, and low mortgage rates for the improvement in home sales activity this year.

Durable orders increased during October, with gains spreading beyond a bounce in aircraft orders. The Census Bureau reports new orders for manufactured durable goods jumped 4.8% during October to a seasonally adjusted $239.4 billion, its 4th straight monthly increase. These figures included a 12.0% increase in new orders for transportation goods, led by sharply higher orders for civilian (+94.1%) and defense (+33.1%) aircraft. New orders for automobile slipped 0.6%. Net of transportation goods, new orders grew 1.0% to $151.2 billion, led by gains in electrical equipment/appliances (+2.3%), fabricated metal products (+2.2%), computers/electronics (+0.9%), and machinery (+0.2%). Civilian capital goods orders net of aircraft—a proxy for business investment—grew 0.4% during the month. Shipments of durable goods grew for the 4th time in 5 months (+0.1% to $234.6 billion). Unfilled orders grew for the 4th straight month with a 0.7% increase to $1.129 trillion) while inventories expanded by less than 0.1% to $383.7 billion.

Consumer sentiment bounces up following the election. The final November reading of the Index of Consumer Sentiment from the University of Michigan was at 93.8, up 6.6 points from October 2016 and 2.5 points from November 2015. The reading also was up 8.2 from the preliminary November reading released a few weeks earlier and based solely on data collected before the election. The current conditions index added 4.1 points to 107.3 (November 2015: 104.3) while the expectations index surged 8.4 points to 85.2 (November 2015: 82.9). The press release noted that consumer sentiment improved across all income and age groupings. The press release also suggested the improvement in the index was reflective of a “presidential honeymoon [that] represent[s] a period in which the promise of gains holds sway over actual economic conditions.”

Retail sales continued to build momentum this fall, while gains in manufacturing were restrained. Here are the 5 things we learned from U.S. economic data released during the week ending November 18. 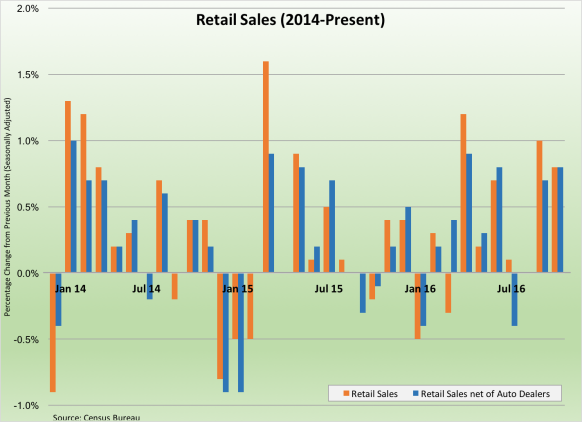 Manufacturing output increased modestly during October. The Federal Reserve estimates manufacturing production grew 0.2% during the month, matching September’s increase but leaving factory output 0.2% below that of a year earlier. Production of durable goods gained 0.4%, with most product types seeing an increase during the month. Auto production expanded for a 5th straight month and was approximately 7.5% above production levels of a year earlier. Nondurables output was unchanged, which included a 0.4% increase in the output of chemicals and a 0.8% drop off in paper production. Overall industrial production was unchanged from September, putting it 0.9% below year ago levels. Utility output slowed 2.6% during October while mining output gained 2.1% Capacity utilization slipped 1/10th of a point to 75.3% (it was at 76.3% during the same month a year ago). Capacity utilization in the manufacturing sector inched up 1/10th of a percentage point to 74.9%. A year earlier, the same measure was at 75.6%.

Higher gasoline prices pull up consumer prices while the impact on wholesale prices was muted. According to the Bureau of Labor Statistics, Consumer Price Index (CPI)) jumped 0.4% on a seasonally adjusted basis during the month, its largest single-month gain since April. Energy CPI surged 3.5% during October (following a 2.9% jump during the previous month) with large increases in the prices for gasoline (+7.0%), fuel oil (+5.9%), utility delivered natural gas (+0.9%), and electricity (+0.4%). Energy CPI was 0.1% above year ago levels, although gasoline prices remained 0.9% below their October 2015 mark. Meanwhile, food prices held steady during the month and were 0.4% below year ago levels. Net of energy and food, core CPI increased by a modest 0.1% during the month, with the largest increases seen for shelter (+0.4%), apparel (+0.3%), and new vehicles (+0.2%). Prices declined for transportation services (-0.2%) and used vehicles (-0.1%). CPI has increased 1.6% over the past year while core CPI was 2.1% above its October 2015 level (essentially at the Fed’s interest target–although the Fed more closely other meaures of inflation).

Homebuilder confidence remained firm in November. The National Association of Home Builders’ Housing Market Index was unchanged during the month, keeping it at a seasonally adjusted reading of 63. This was the 3rd straight month in which the measure of homebuilder sentiment was above a reading of 60. The index grew in 3 of 4 Census regions, while the HMI held steady in the South. Also unchanged during the month was the index measuring sales of new single-family homes (at 69) while the index for expected sales over the next 6 months shed 2 points to 69. The traffic for prospective buyers index added a point to 47. The press release noted that “[o]ngoing job creation, rising incomes and attractive mortgage rates are supporting demand in the single-family housing sector. This will help keep housing on a steady, upward glide path in the months ahead.”

Leading indicators suggest a small gain in economic activity during October. The Conference Board’s Leading Economic Index (LEI) grew by 1/10th of a point to 124.5 (2010=100), its 2nd straight monthly increase and its 4th gain over the past 5 months. 6 of 10 LEI components made a positive contribution to the index, led by the interest rate spread, average weekly manufacturing hours worked, and nondefense capital goods orders (net of aircraft). Also adding 1/10th of a point was the coincident index (to 114.3). All 4 components of the measure made a positive contribution to the index, led by nonfarm payrolls and personal income net of transfer payments. The lagging index added 3/10ths of a point to 122.9, with 3 of 7 index components making a positive contribution. Even though all 3 indices had small increases, the press release declares that “the economy will continue expanding into early 2017.”

During a week of much political news, economic data pointed to stability. Here are the 5 things we learned from U.S. economic data released during the week ending November 11.

The number of job openings grew slightly while hiring slowed in September. The Bureau of Labor Statistics estimates that there were a seasonally adjusted 5.486 million job openings at the end of September. This was up 33,000 from August and 2.4% from a year earlier. The year-to-year growth rate in private sector job openings was slightly slower—the 4.987 million private sector job openings at the end of September represented a 2.2% gain from September 2015. Industries with the largest year-to-year gains in job gains were construction (+112.5%), manufacturing (+7.1%), transportation/warehousing (+6.5%), and retail (+2.1%). 5.081 million people were hired during September, off 187,000 from the prior month and down 0.9% from September 2015’s hiring pace. The largest positive 12-month comparables in hiring were in the government (+12.3%), transportation/warehousing (+4.4%), retail (+3.6%), wholesale trade (+3.0%), and professional/business services (+1.8%). Also falling were separations, dropping by 138,000 to 4.914 million. This was 0.8% below the year ago pace of separations. 3.270 million people voluntarily departed their jobs during September, down 581,000 from August but still 11.6% ahead of the September 2015 rate. Layoffs remained soft–at 1.610 million, layoffs declined 281,000 from August 2016 and was 21.7% below the year ago pace.

Wholesalers’ inventories largely held steady in September. Merchant wholesale inventories inched up 1/10th of a percent to a seasonally adjusted $590.2 billion. This was 0.1% below year ago levels for the Census Bureau measure. Inventories of durable goods contracted 0.4% during the month to $354.9 billion (-1.9% vs. September 2015), with inventory declines greater than 1.0% for metals, computer equipment, machinery, and automobiles. Nondurable goods inventories expanded 0.9% during the month to $235.3 billion (+2.7% vs. September 2015), reflecting sizable gains for petroleum (+3.8%), drugs (+3.3%), and paper (+0.8%). The inventory-to-sales (I/S) was at 1.33 in September, matching the ratios from both August 2016 and September 2015. The I/S ratio for durable goods slipped by a basis point to 1.66 while that for nondurable goods added a basis point to 1.02.

Small business owner sentiment edged up to its highest point in a year during October. The Small Business Optimism Index from the National Federation of Independent Business added 8/10ths of a point to a seasonally adjusted reading of 94.9. This was the measure’s best reading since October 2015 when it was at 96.0. The gain occurred even though only 5 of the index’s 10 components improved during the month, led by a big 9-point increase in the measure tracking respondents’ plans to increase inventories.  Also improving from their September readings were index components for current job openings (up 4 points), current inventories (up 3 points), whether it is a good time to expand (up 2 points), and expected credit conditions (up a point). Falling sharply was the expected economic conditions index (down 7 points), with declines also seen for indices tracking expected real sales (down 3 points) and earning trends (down a point). The press release, published on election day, said that business owners “need predictability…that the political climate creates the opposite.”

Banks report maintaining current lending standards to their commercial customers. According to survey data collected by the Federal Reserve and published in its latest edition of the Senior Loan Officer Opinion Survey on Bank Lending Practices, domestic banks kept their lending standards to both large/medium sized companies and to small firms “unchanged.” Some banks reported increasing the size of credit lines, shrinking the size of spreads between the cost of borrowed funds and their lending rates, and less frequent use of interest rate floors. At the same time, a small percentage of banks reported weaker demand for commercial loans from large/medium sized companies, but a “modest fraction” of banks reported greater interest in lines of credit from their commercial customers.